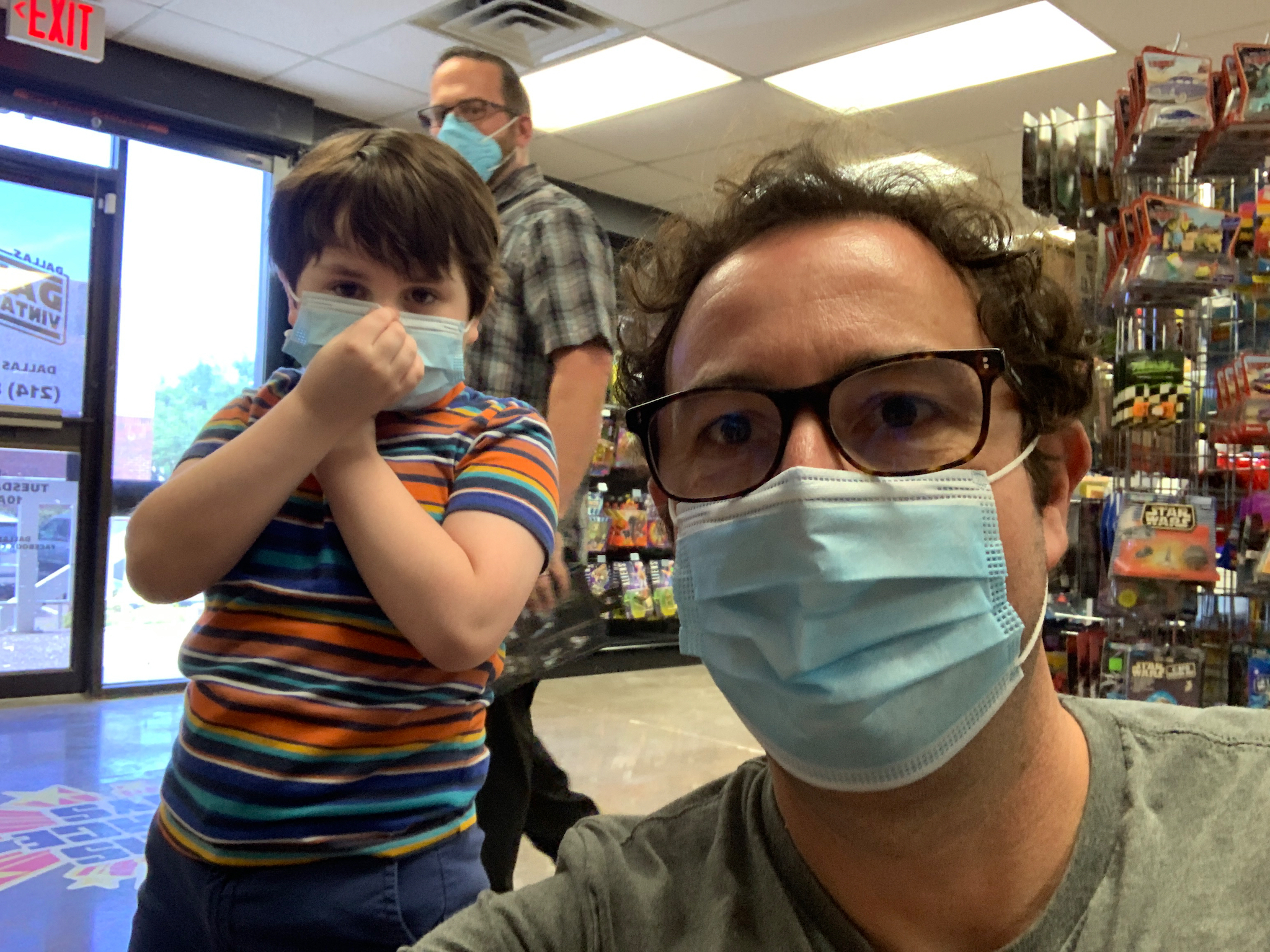 Yes, not even the age of corona, one that has sadly seen the shuttering of many beloved local institutions, can stop the juggernaut of recycled dreams that is Dallas Vintage Toys. After a frightening and disorienting two week shutdown, the doors are open once agains to kids and adult collectors alike. And in a spirit of bold defiance to these unprecedented times(tm), they’ve tripled the floor space and inventory, and dammit they even installed a big old Castle Grayskull facade for your Instagramming pleasure.

The new normal is old toys!

This is just a little post to show you some of the things we saw when we visited on the day of the Grand Opening. Unfortunately, it was over lunch on a working day, so I didn’t have a lot of time to spare. I’m gonna take the kid back on Saturday for a more extended visit with more pictures. 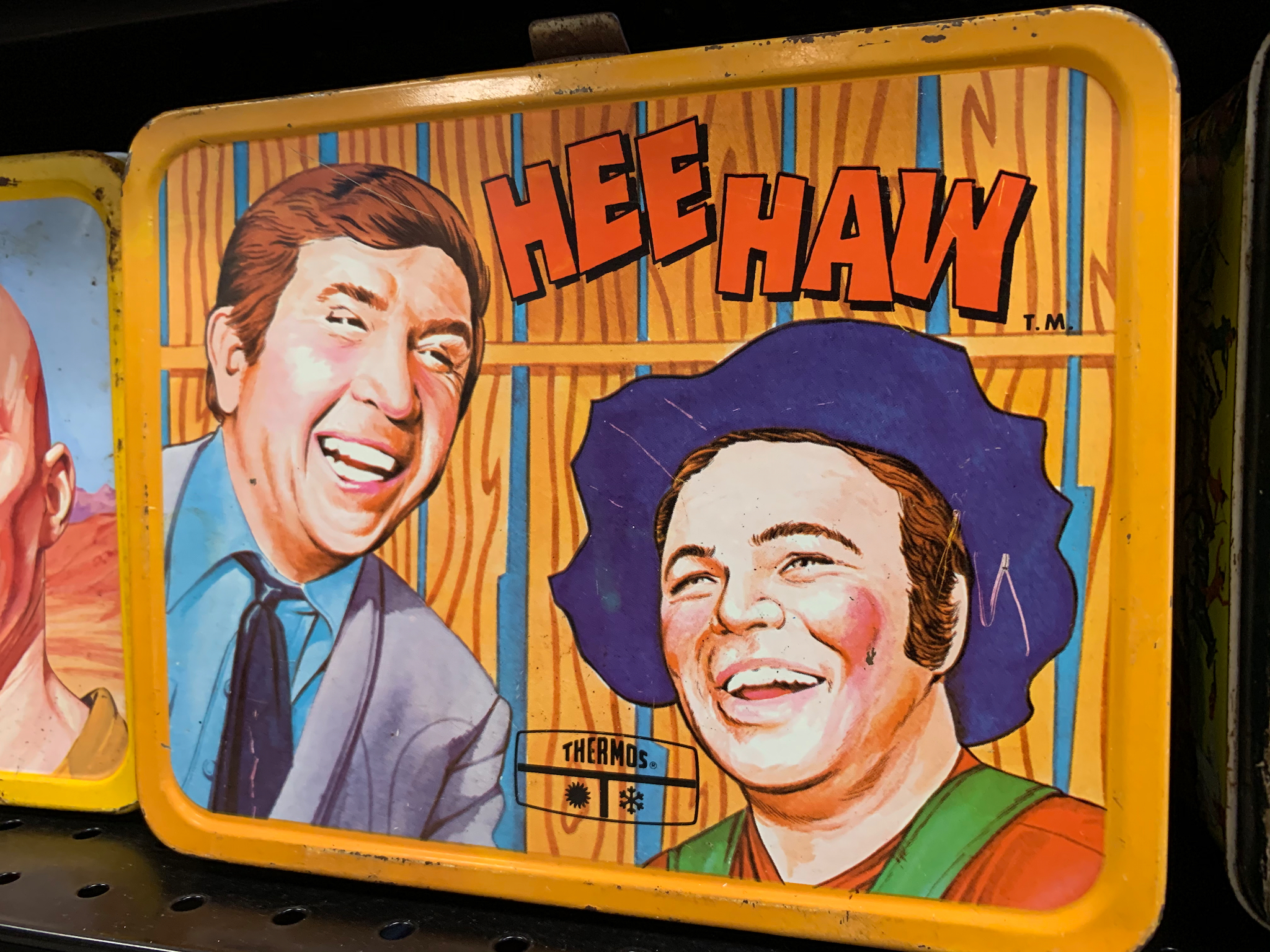 Anyways, there’s a new and rather amusing selection of vintage lunchboxes. I don’t recall that ever being in the store before. Kung Fu, Dukes of Hazzard, Rainbow Brite, Transformers, Three’s Company, Mork and Mindy — I’m talking all the good ones. The little one doesn’t really understand what a lunch box is for, but he does agree that these ones are pretty awesome.

(If you’d like to learn more about Hee Haw, I’d suggest you visit your local library.) 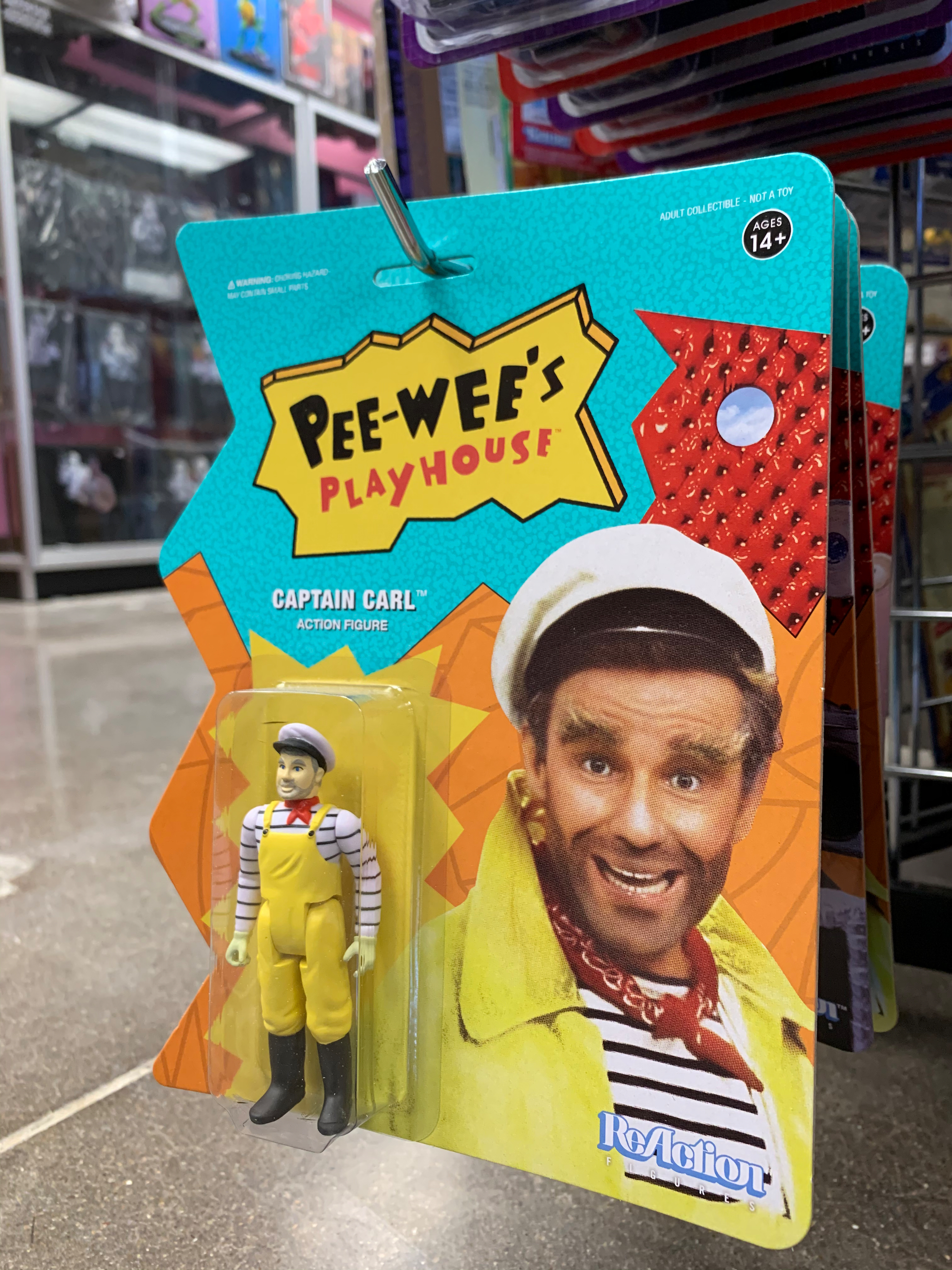 The store carries way more than just old toys, there’s also a wide selection of the stuff that would appeal to the “adult collector.” As far as I know, there are no beaded curtain rooms behind the counter, though. 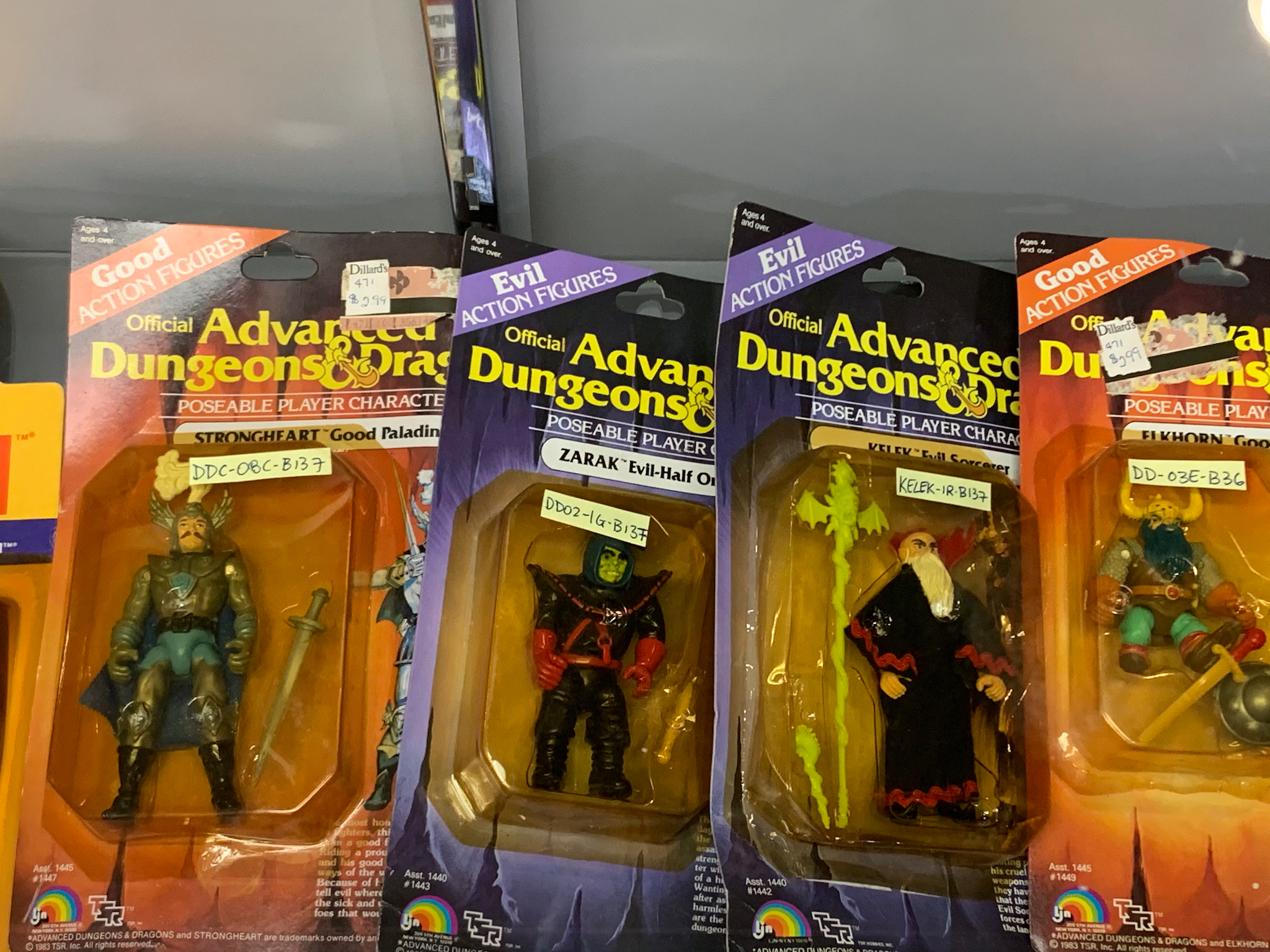 They have a genuinely good selection, and I always appreciate finding examples of more obscure toy lines on the shelves. The prices are fair, I suppose, and what’s better is that they range from very affordable older toys to really high end collectibles. Most of those are in hermetically sealed plastic containers in the Castle Grayskull room at the back.

Man, I must have had a lot of toys when I was a kid. I mean seriously, a lot. Because I’m constantly seeing stuff in there that I’d forgotten ages ago that I’d ever had. I suppose I ought to thank my Mom and Dad tonight.

At the back of the store is the pièce de résistance, a lifesize (their words) replica of Castle Grayskull’s facade!

BY THE POWER OF GRAYSKULL! 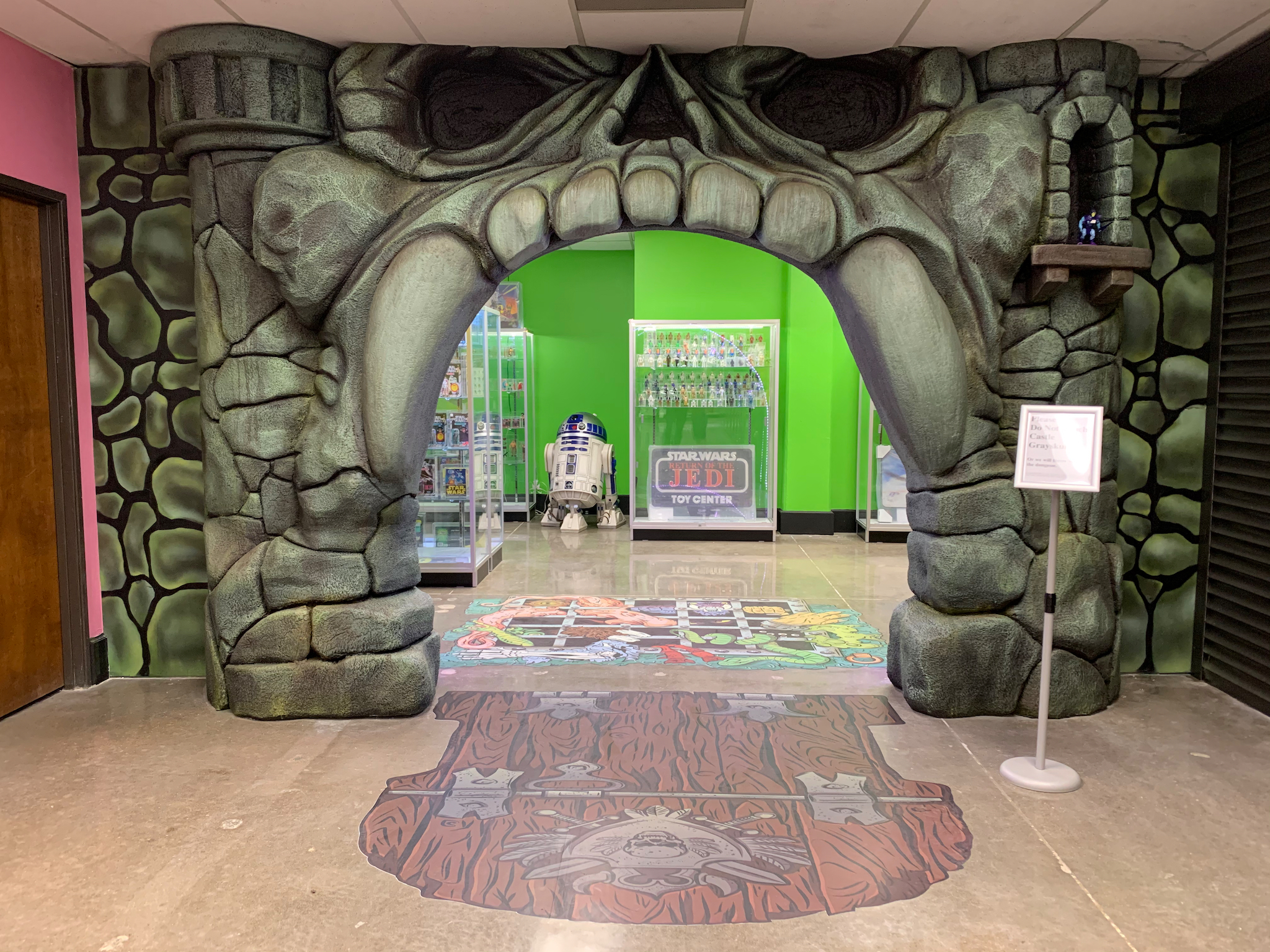 So I’d planned to show Anthony doing his He-Man pose in the door, but there was an actual lifesize Jawa replica in the room with glowing yellow eyes just staring at him. Scared the crap out of him. So no pic. 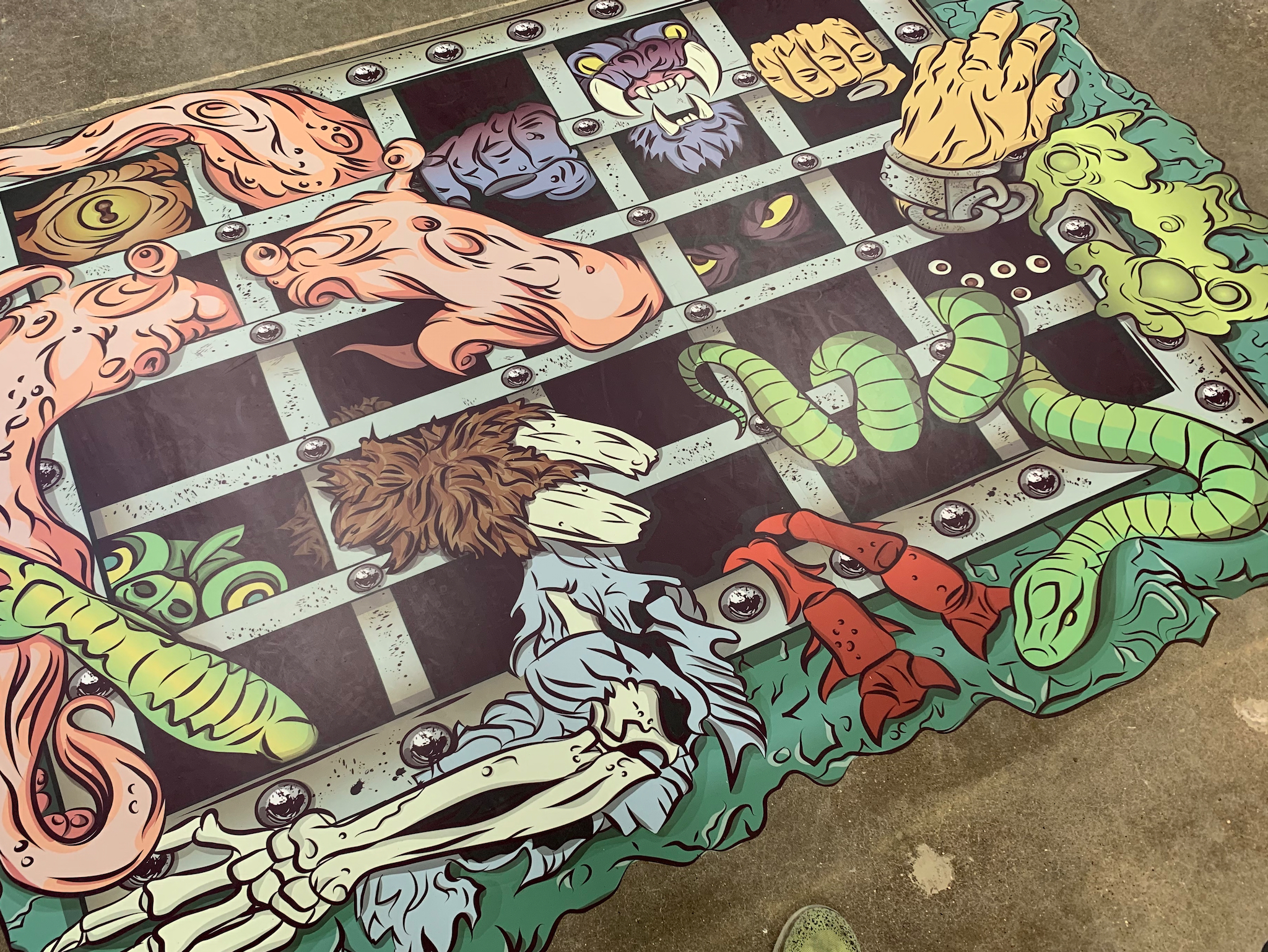 The proportionate reproduction of the Castle Grayskull dungeon sticker from the old toy is something that can only be chalked up to love. Really, hats off to Dallas Vintage. 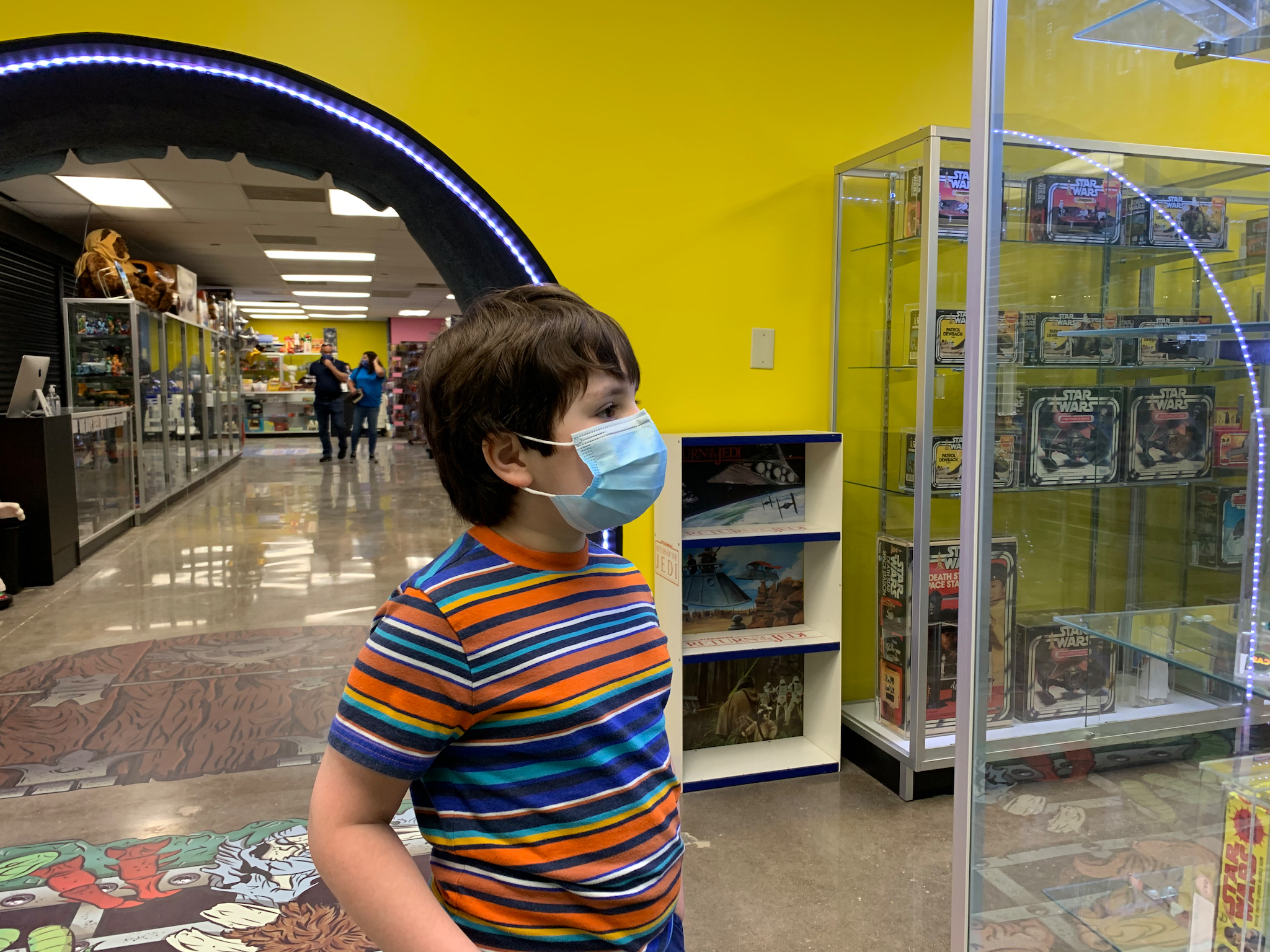 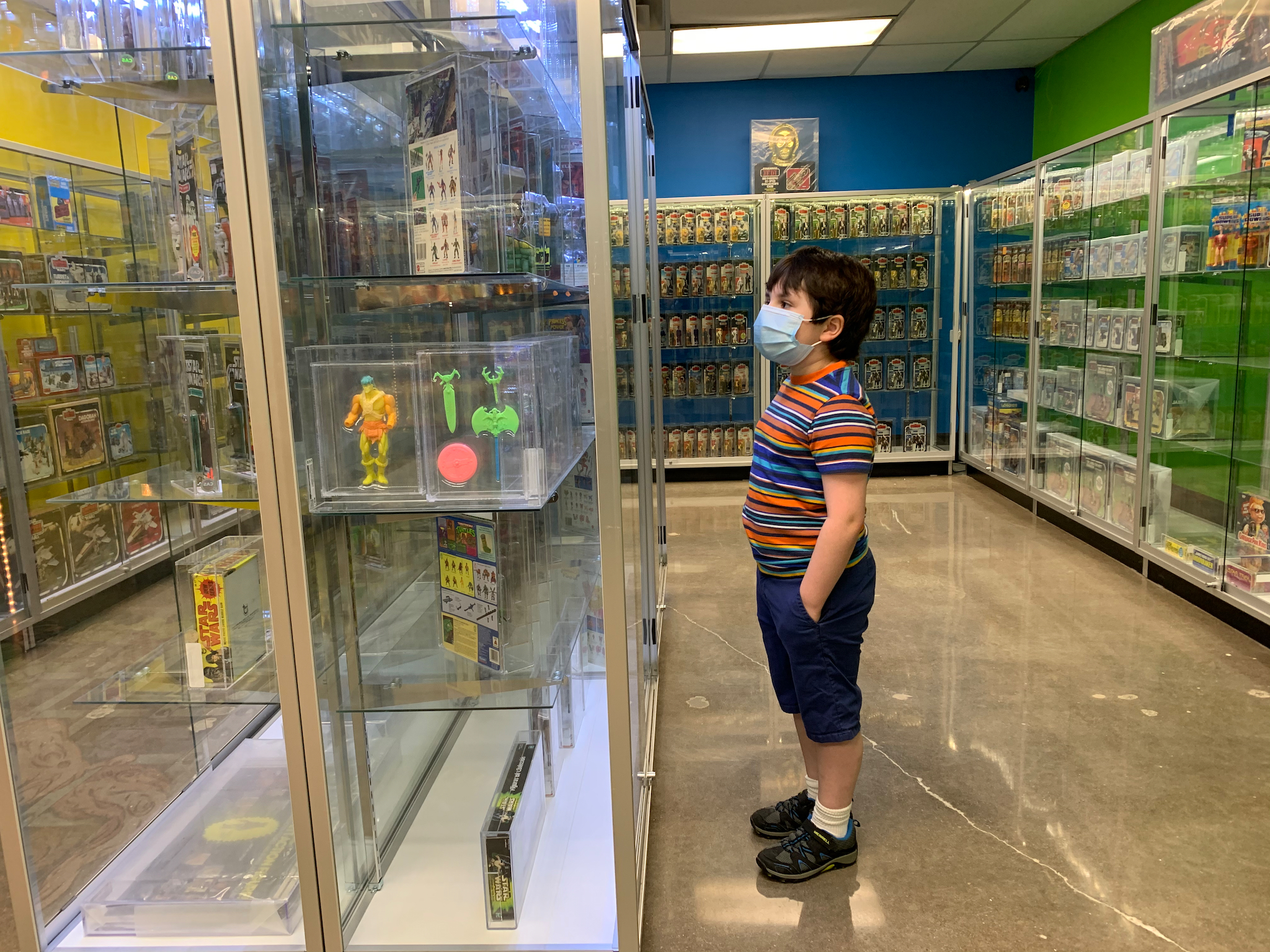 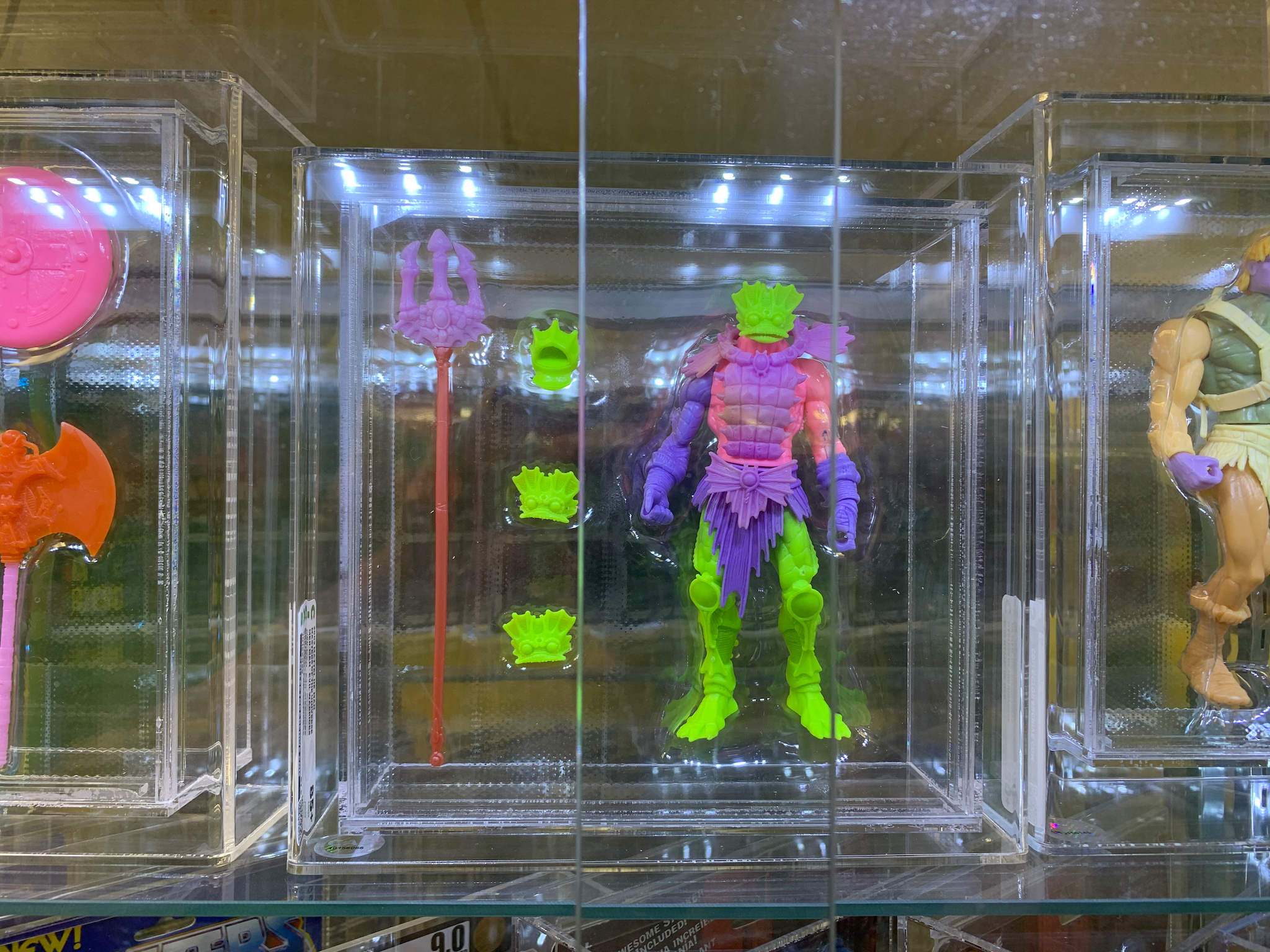 I have a kid with such an immense knowledge of toys. For instance, he told me that these were special production runs they do to test the molds with whatever plastic they have on hand. These happened to be done with fluorescent plastics, and now go for a bundle. Incredible. 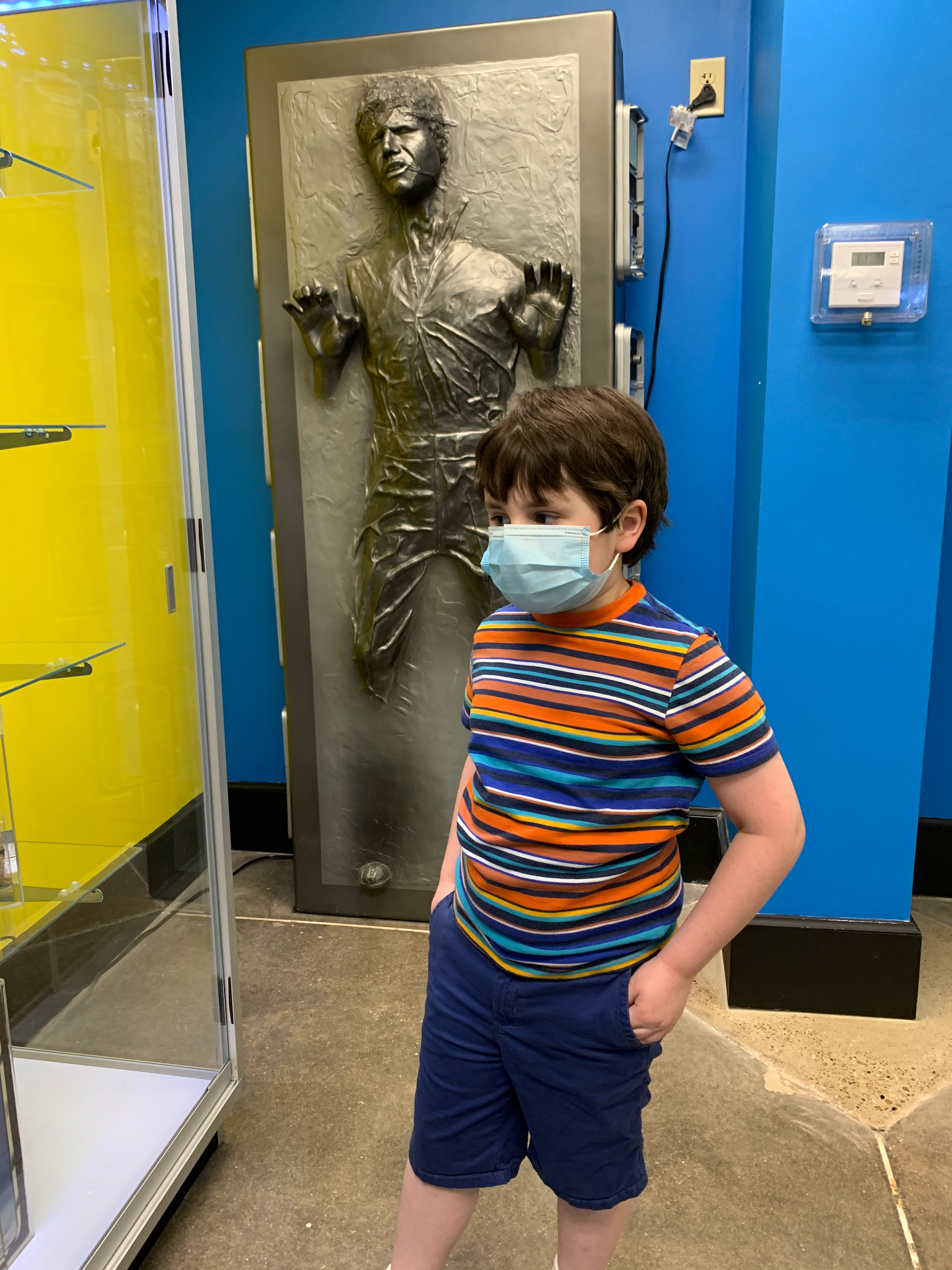 The store really does a great job of providing atmosphere above and beyond a great selection. This stuff is only the tip of the iceberg. I’ll be back with more considered photos. 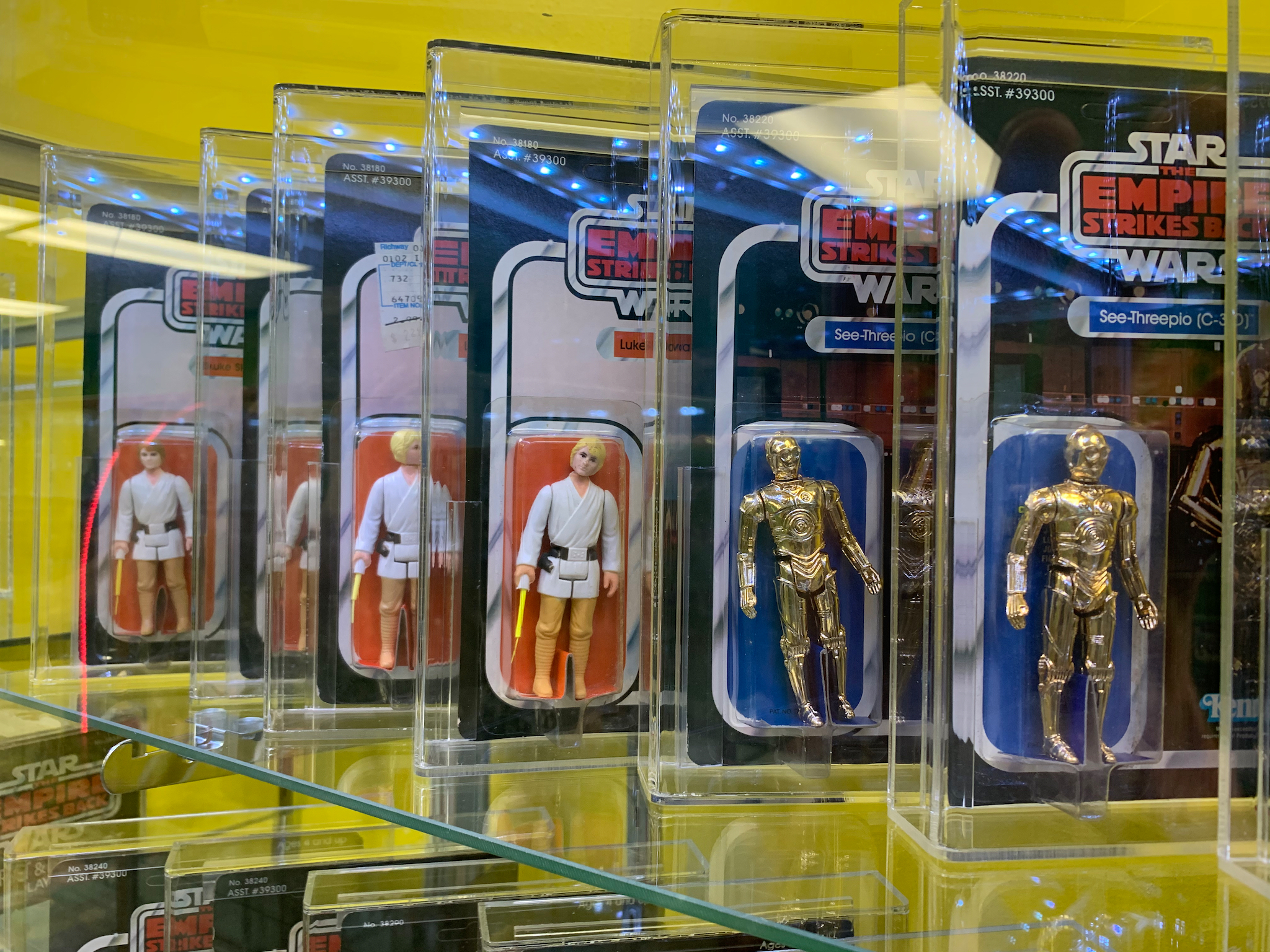 Sealed inside plastic cases are very expensive unopened toys from the seventies and eighties! It’s crazy to me to think that you (or your son, obviously) could actually relive the experience of opening a “brand new” Transformer from 1984; that those artifacts have been preserved all those years, in better condition, perhaps, than the memories of them that float around in our heads.