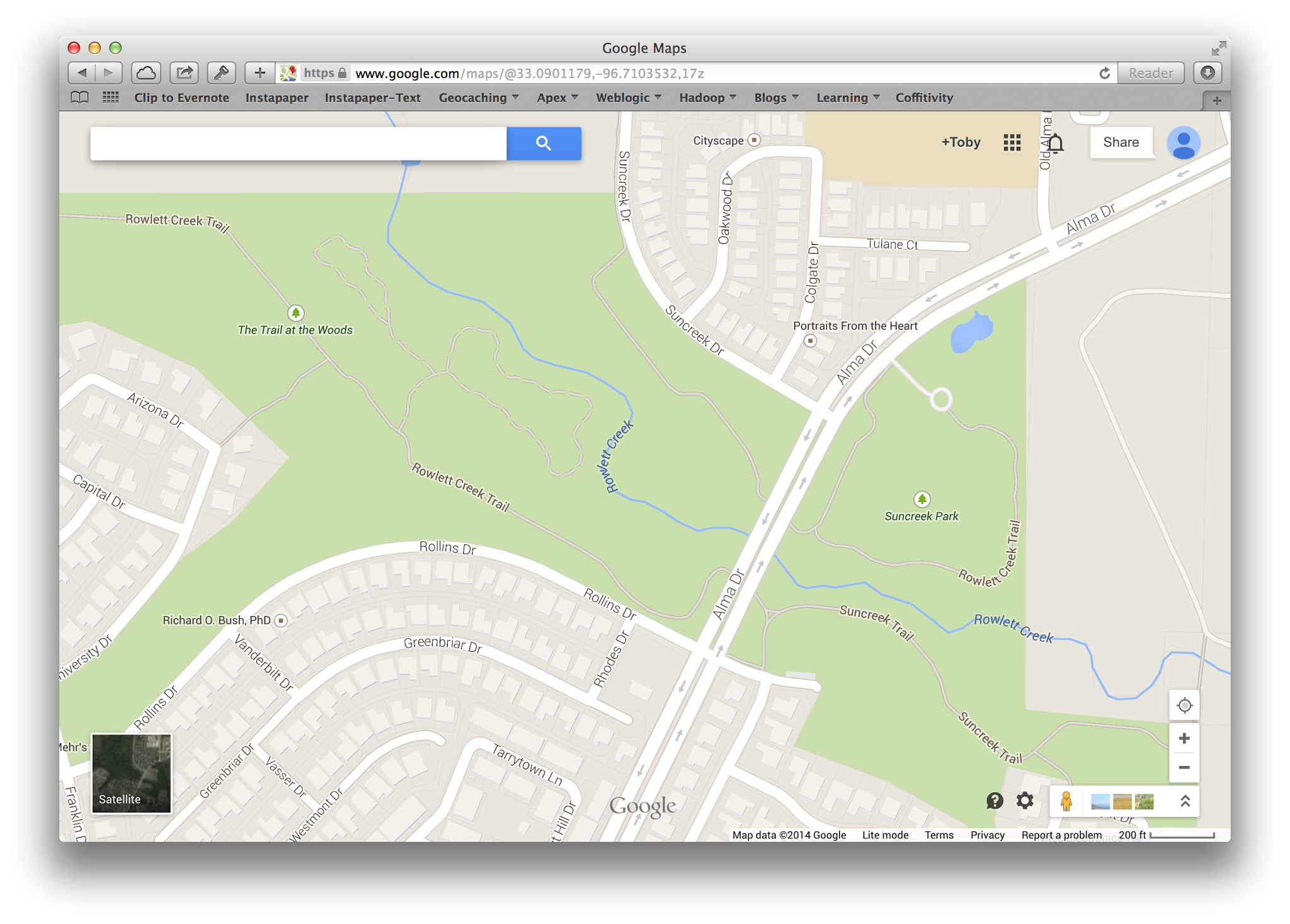 Two weeks ago my wife told me about a new park she had discovered while killing time between a couple of the kids' classes.

While climbing an overpass she caught site of some paved trails just off the road that interested her enough to want to Google it later. The trails turned out to be part of Suncreek Park in Allen, Texas. The website claims Suncreek sports only four tenths of a mile of paved trails, so it’s not much for walking, hiking, or biking. It does sport some scenic views, though, as well as a handful of geocaching opportunities. One unexpected and mysterious feature deserves further exploration, as I will soon relate. We had an opportunity to check out the park firsthand, so we made the trip up to Allen. When we got there we discovered a smallish playground with toddler (and dog) friendly equipment. The baby particularly enjoyed little chair shaped like a car that sat on a big spring and wobbled him back and forth. 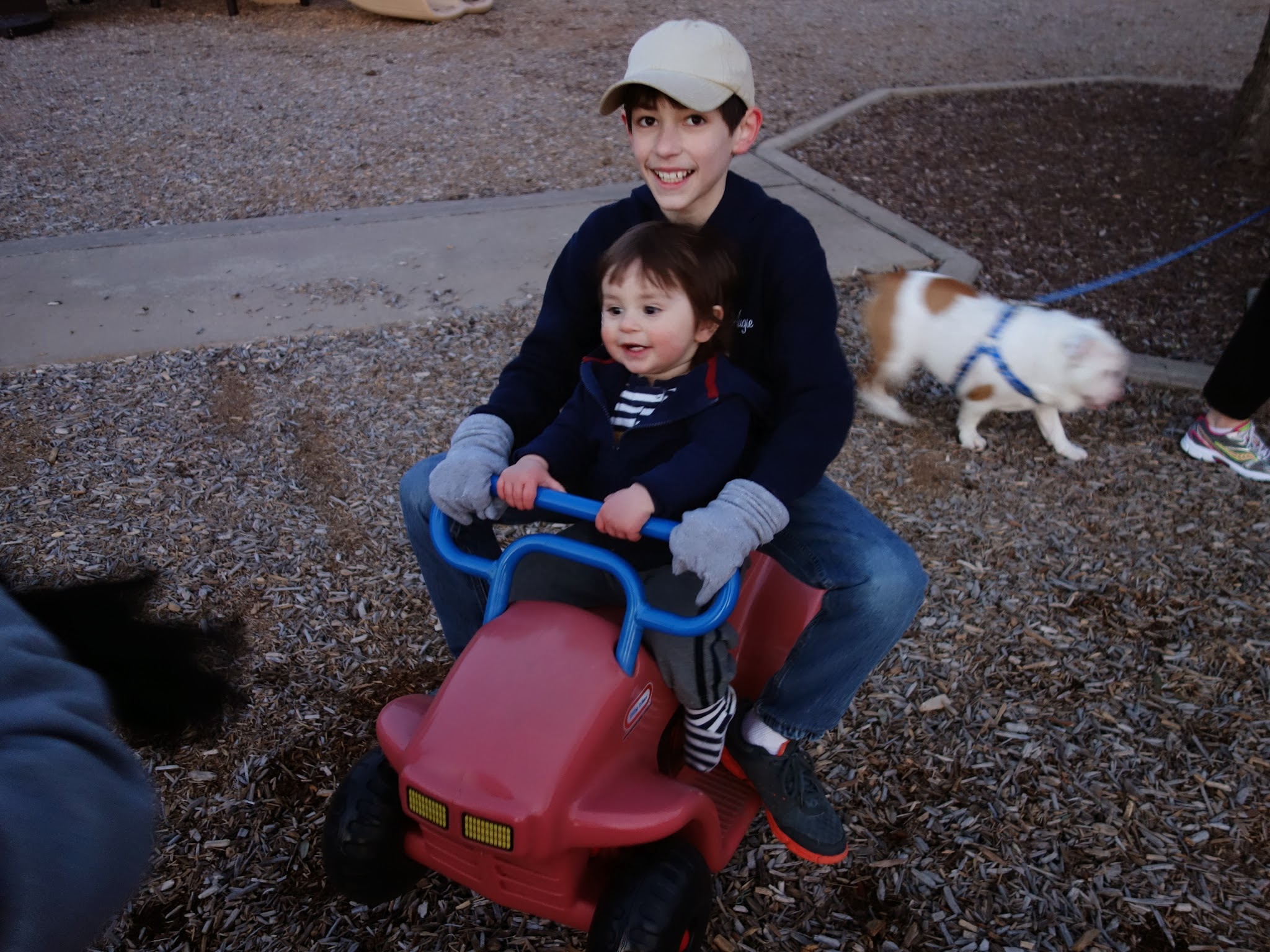 Since no one else was there, Frank the Dog got to enjoy the kiddie slides, but balked at some of the larger ones. It was funny watching him try to scoot back up the biggest of them after chickening out halfway. The playground sits next to a couple of large decks with seating and table areas overlooking a miniature wetland of sorts. Unfortunately close to the deck I spotted a few pieces litter that detracted from the natural scenery. It’s a shame that garbage lines so many of our creeks and waterways. Perhaps that’s the case in any large city, but I’m not so sure.

The playground also serves as a trailhead, so we started out from that point. South of us a couple of guys standing in a large field were trying to get their remote control drone to work, but I never saw it lift off the ground. Just a little farther along the trail forked off into a small patch of woods. We decided to investigate. The paths were wide and well maintained. The trail was clear of brush and debris for several feet on either side. A new fork in the trail led to an abandoned bridge, beyond which appeared to lie the private property of some working farm. On the other side of the trail an old road, now inaccessible by car, ran straight north to the borders of the park. We didn’t have a lot of daylight available to us, so I passed up a geocaching opportunity on this end of the park in favor of a easier grab later on. It was around this area that we ran into a couple of curious signs. One warned us not to trespass on private property. (Then why does this public park lead right through it?) The other announced that we were entering “The Gardens of Connemara”, like something out of a Conan novel. As the sign explained, the gardens are a private nature conservancy accessible from the park, but not part of it. Since we saw no gate, it was unclear whether there are parts of the gardens accessible to the public, or if we hadn’t yet entered the gardens. At any rate, the sign said no dogs, so we turned around rather than have to face the hassle of getting booted. No matter. It looked interesting enough, so I made the decision to come back another day. Later I learned that you can buy a membership for the privilege of visiting the garden at any time. Otherwise they offer guided tours to the public at posted times. It was a coolish evening, but the direct sunlight warmed you up. It was about that time that the baby decided to toss the hat and blanket, which led to a direct confrontation with Mom. Baby won that fight. We passed under the overpass where I spotted more of Dallas’s famous positive graffiti. This time it was a golden cross. I tried to focus the kids' attention on that, rather than the “Fuck Suparman” invective scrawled on the concrete ramp opposite.

Round the corner the path wound through a small grove of trees. It was beautiful and kind of striking in the evening light. The denuded trees seemed still and quiet, and the thinnest gray haze, barely perceptible, hung in the air at the far end of the path. There a couple of tall trees arced over the entrance to the now darkened woods. Something about watching Augie and Lucy contemplate the dark forest path brought to mind the story of Hansel and Gretel. My first geocaching opportunity came a short ways into the woods, after the paved sidewalk ended and was replaced by a dirt trail that roughly paralleled a creek off to our left. The cache was a traditional ammo can-type hide, nothing too difficult to spot. It was located about 15 yards off the path, stuffed in an old hollowed out log and sparsely covered with a few branches. We didn’t find anything of much value, but at least the contents and log book were dry. Augie and I signed the log book and I left a few decorative bottle caps and some fall decorations in place of the trinkets Lucy took. I forget now what that was. While I was loading up the cache with swag from my packback, we began to hear some loud voices and yelling from farther up the trail. Kassi, who had gone ahead with the baby, began calling to us in an alarmed tone. We packed up and marched over to her position, where I could see that a group of teenagers were out screwing around in the woods. They didn’t look too threatening to me, but with the recent murder fresh in mind, Kassi was a little wary. We decided to take a different branch of the trail that seemed to loop around them. The trail narrowed, and the tacky soil was making conditions a little rough for the stroller. Still, we had managed worse terrain before. We pushed ahead until we arrived at a washed out bridge, and I could see that the teens from earlier had either walked over to this spot, or we were looking at a different group of kids. We could see that there were paved trails on the opposite side of the creek, and our goal was to try to find a crossing. Looking at Google Maps, it appeared that the creek ended just north of us at a small pool, where we could theoretically round the northern end to get to the other side of the creek. To do that it looked to me like we’d have to go cross-country. Kassi thought that the trails would eventually lead us there, and we had a disagreement over the course to take. At any rate it was getting darker and the sketchy kids were making Kassi nervous, so we figured we’d best head back to the car. We had another disagreement over which path to take. Luckily I won out on that one, cause I was right! Ha. For a small park with only a limited amount of paved walking trails, Suncreek left me feeling that we had only only scratched the surface of its possibilities. A return trip is definitely in order. There is a separate system of trails south of where we parked that apparently do not link up with the ones we were on. Also, I’d like to see what secrets the Gardens of Connemara have to offer, especially come spring.