Got the Munchies? Try Hypnotic Donuts. 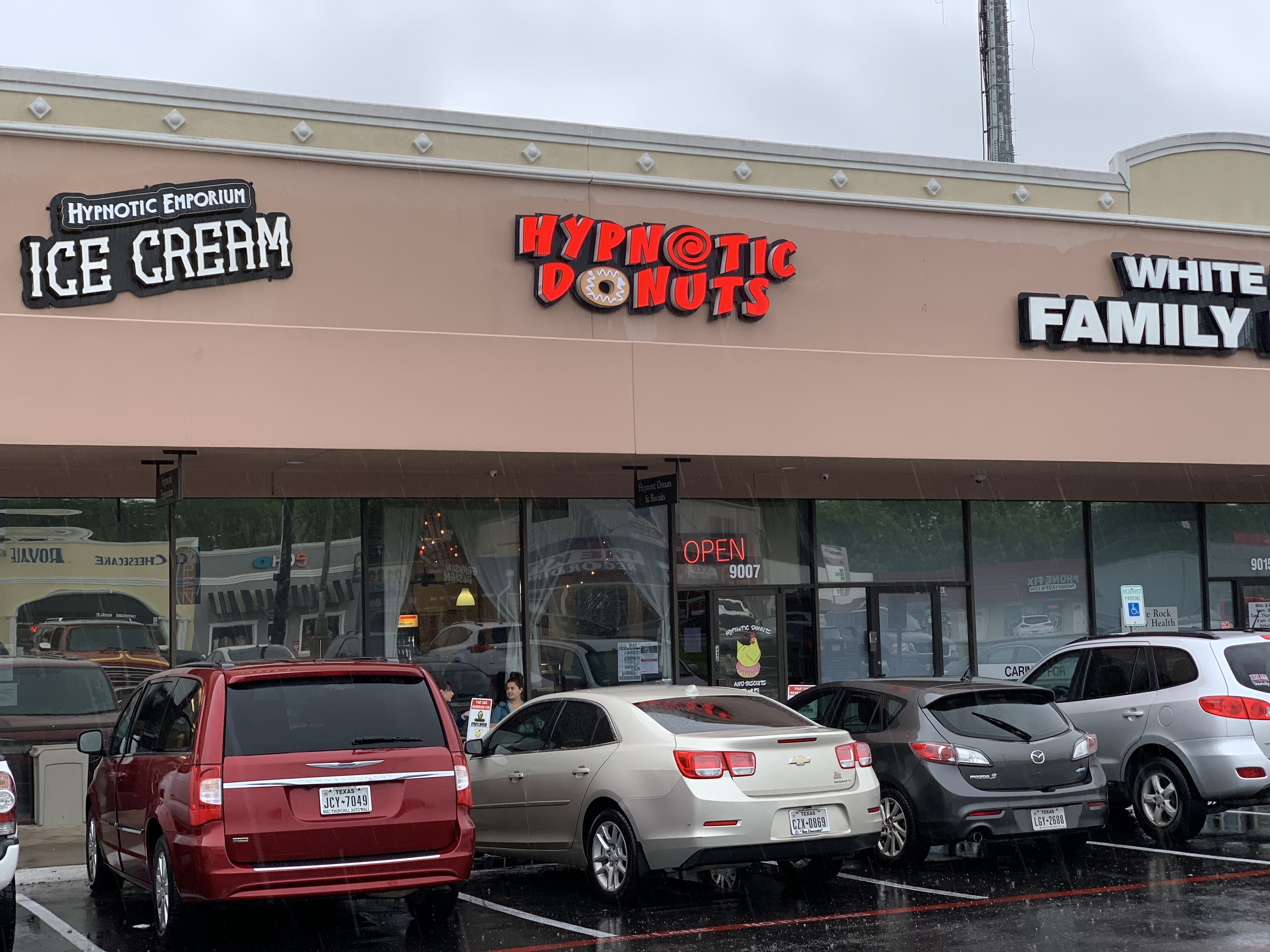 It was a rainy, Seattle-y Saturday morning in Dallas when I decided to take the kids out for a Daddy-Daughter-Baby Day run to Hypnotic Donuts, one of those fancy donut places that seem to be popping up around town these days like vape shops were five about years ago. They’d been asking me to take them on a Pokémon hunt, and I decided I’d treat them to breakfast as a bonus and incentive for getting up extra early.

Going out for donuts is especially popular, since they’re normally not able to eat the standard variety at home, Mom and older brother being gluten allergic, and our house naturally kept free of such fare. I already had an idea in mind of a few places nearby I wanted to try, and after refreshing my memory on Google, I opted for this place after reading reviews about their great coffee.

Hypnotic Donuts is located just north of the Dallas Arboretum, and had the weather been more accommodating, we might have made a day of it. I’m trying not to let the incessant rains of the past year get to me. Trying to learn to get out and just do stuff regardless; that it’s ok to let a little rain fall on my face once and a while. That morning had that rainy-but-in-a-good-way feel to it.

As we made our way down the kids were in a great mood. Lucy treated us to some comedy songs from this YouTuber she’s into. I suppose YouTube has replaced radio these days.

We had to make a run for cover from the car, so I didn’t notice that Hypnotic Donuts sits right next to Hypnotic Emporium Ice Cream, which would make a killer stop and a nice one-two combo on a hot summer afternoon after a day out at the Arboretum. Mental note made. 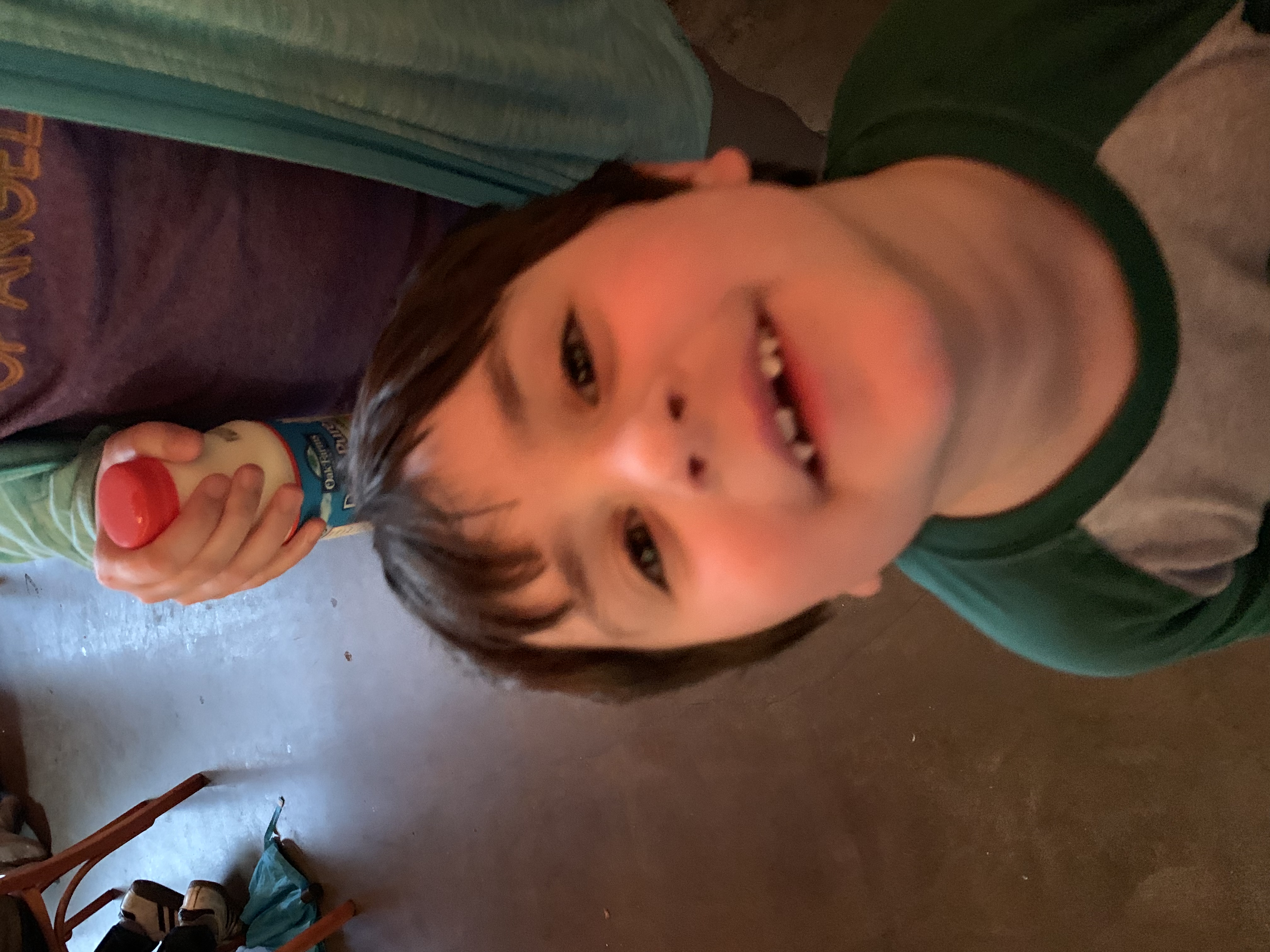 The place was completely crowded, even on a rainy morning, with no place to sit and several people standing around waiting for their orders. Place is popular. The menu on the wall made it clear that although donuts might have brought you here, the chicken biscuits were why you were gonna park your ass for a sit-down meal. I knew I had to get one. They didn’t have the one I wanted that day, the Endooya (with pimento cheese and sausage), so I opted for the Kaye’s — jalapeno and cream cheese, an excellent combo. 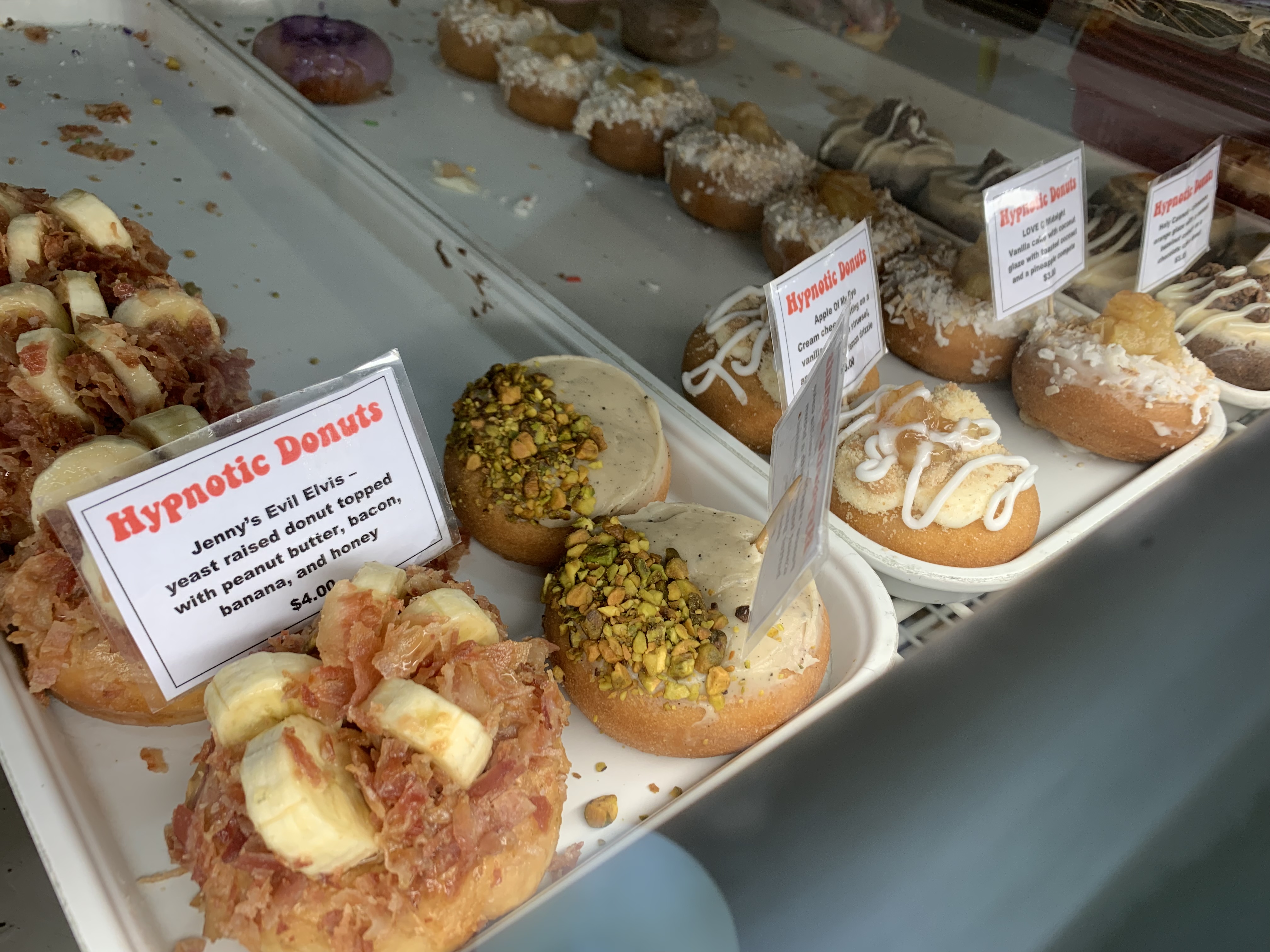 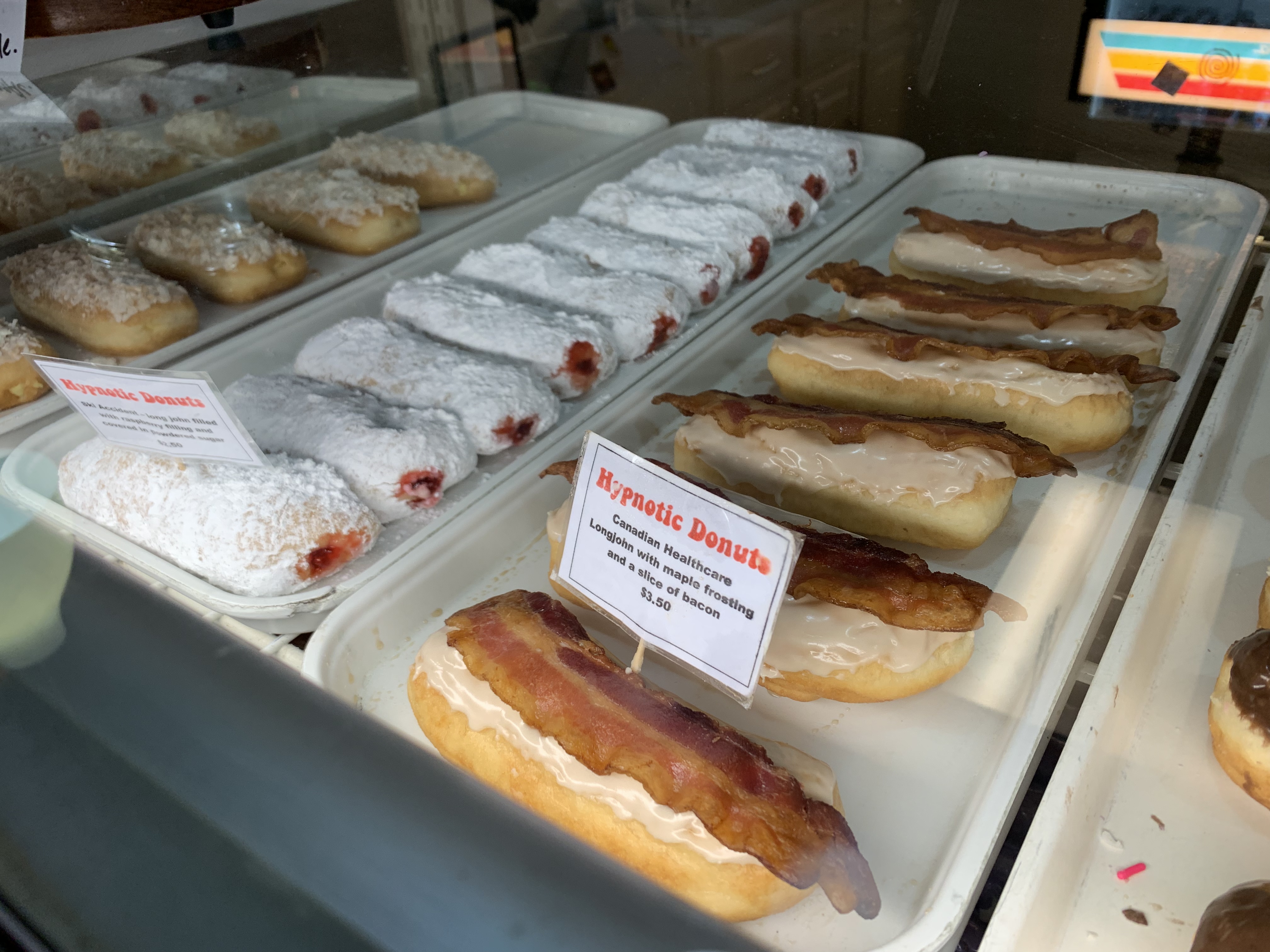 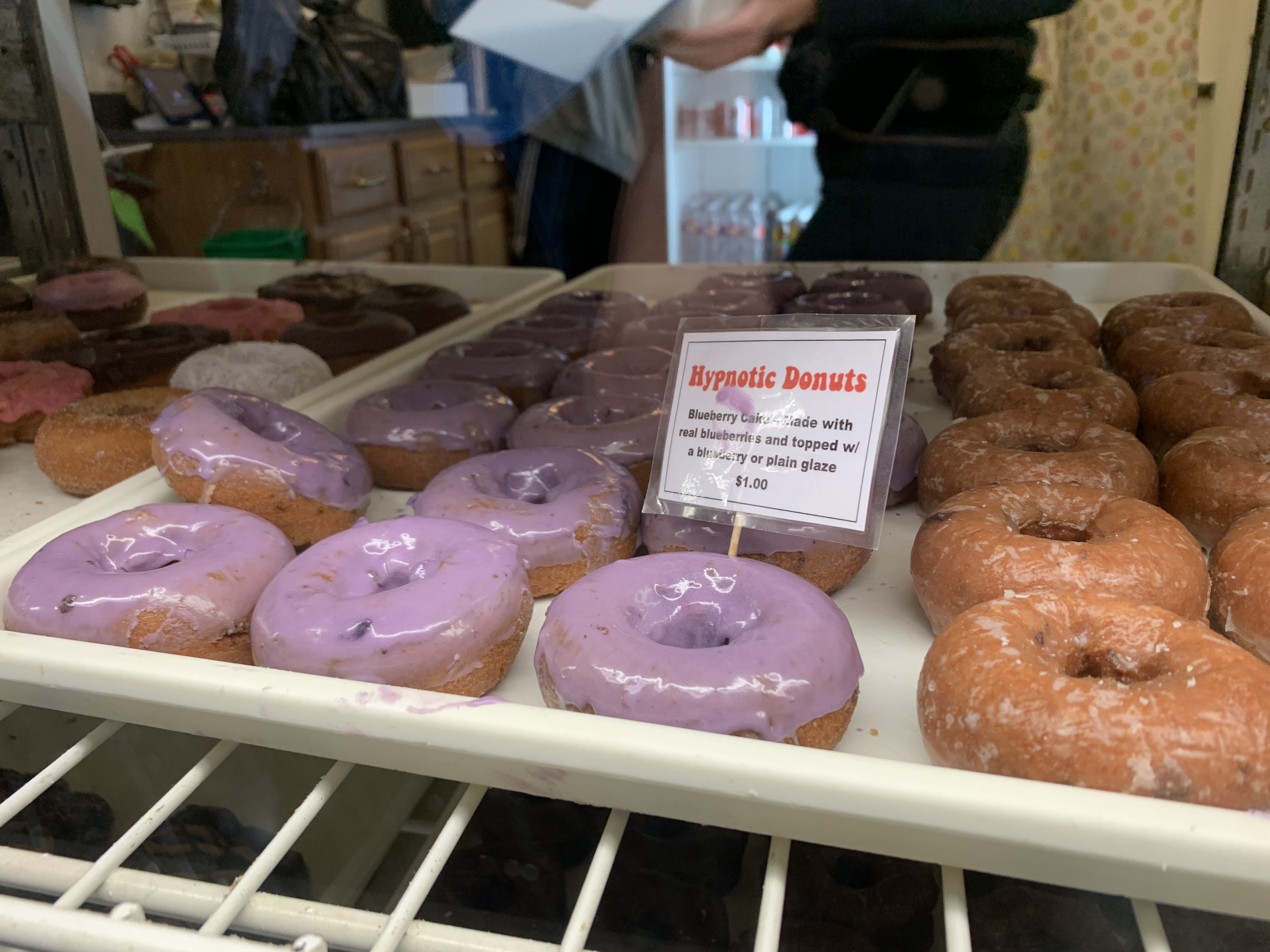 Trippy, fun, and just mouth-wateringly good. They were fun just to look at. I really wish I could have tried a little donut-hole sampler back of all the different varieties. And I noticed that fresh ingredients were a selling point on a lot of them, like the blueberry glazed one I picked for myself. The kids went with some more pedestrian chocolate-sprinkled options. 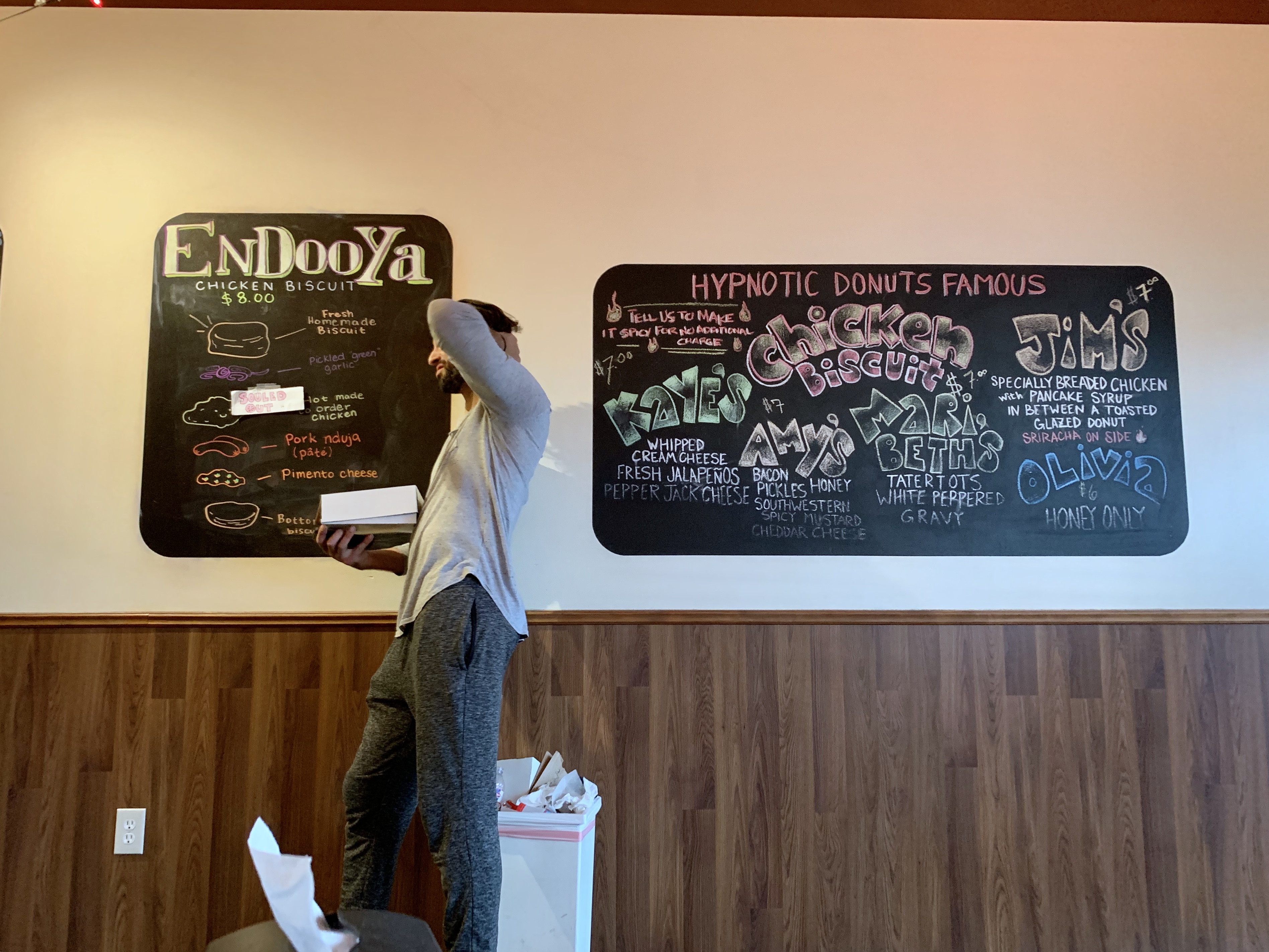 I made my coffee and we waited for a few minutes for our biscuit order to come up. Not too long, though the little one was just dying to dig in to those donuts. Lucy and I noticed that they had a really entertaining way of getting the written orders back to the kitchen, sending them flying on a little zip line that was strung from the register back to the grill. 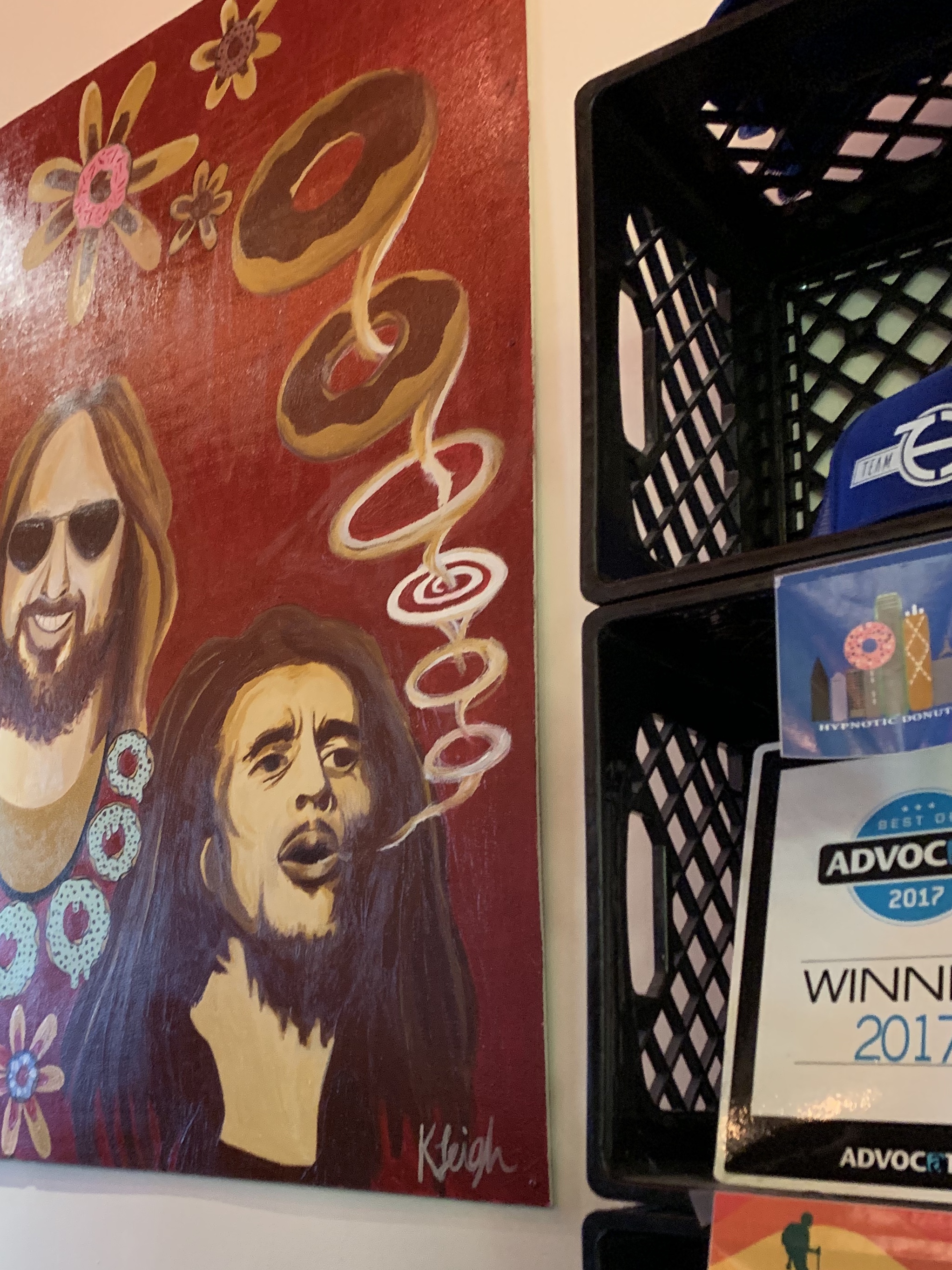 The “hypnotic” bit is part of a gimmicky psychedelic 60’s theme that reminded me of Ben and Jerry’s. But unless they’re selling pot brownies under the counter, it seems sort of overdone. But who knows, maybe this is how Bob Marley satisfied his munchies back in the day. It amused me to imagine a fat Bob Marley alive today with his own chain of donut shops and pot dispensaries. 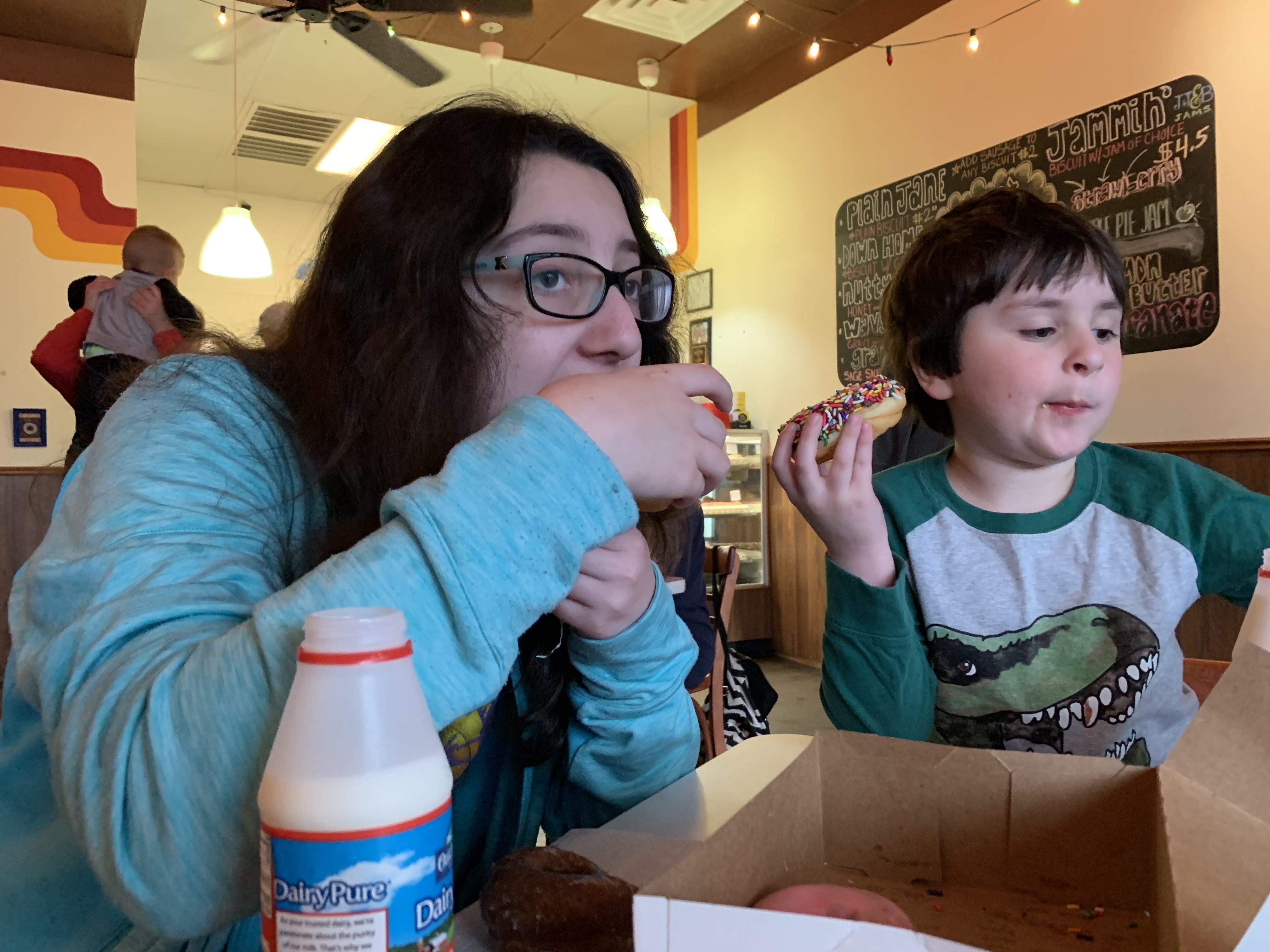 Luckily a table opened up right before our order was called, so we got our chance to eat inside instead of out in the car. The kids devoured the stuff. I could tell by how wide Lucy’s eyes got when she bit into it that this was better than your average donut, to which she emphatically concurred. That certainly was the case with my blueberry glazed, which had a wonderful fruity flavor and hearty, cakey texture. I only regret we didn’t sample a couple of the other wilder varieties. You know, strictly for review purposes. 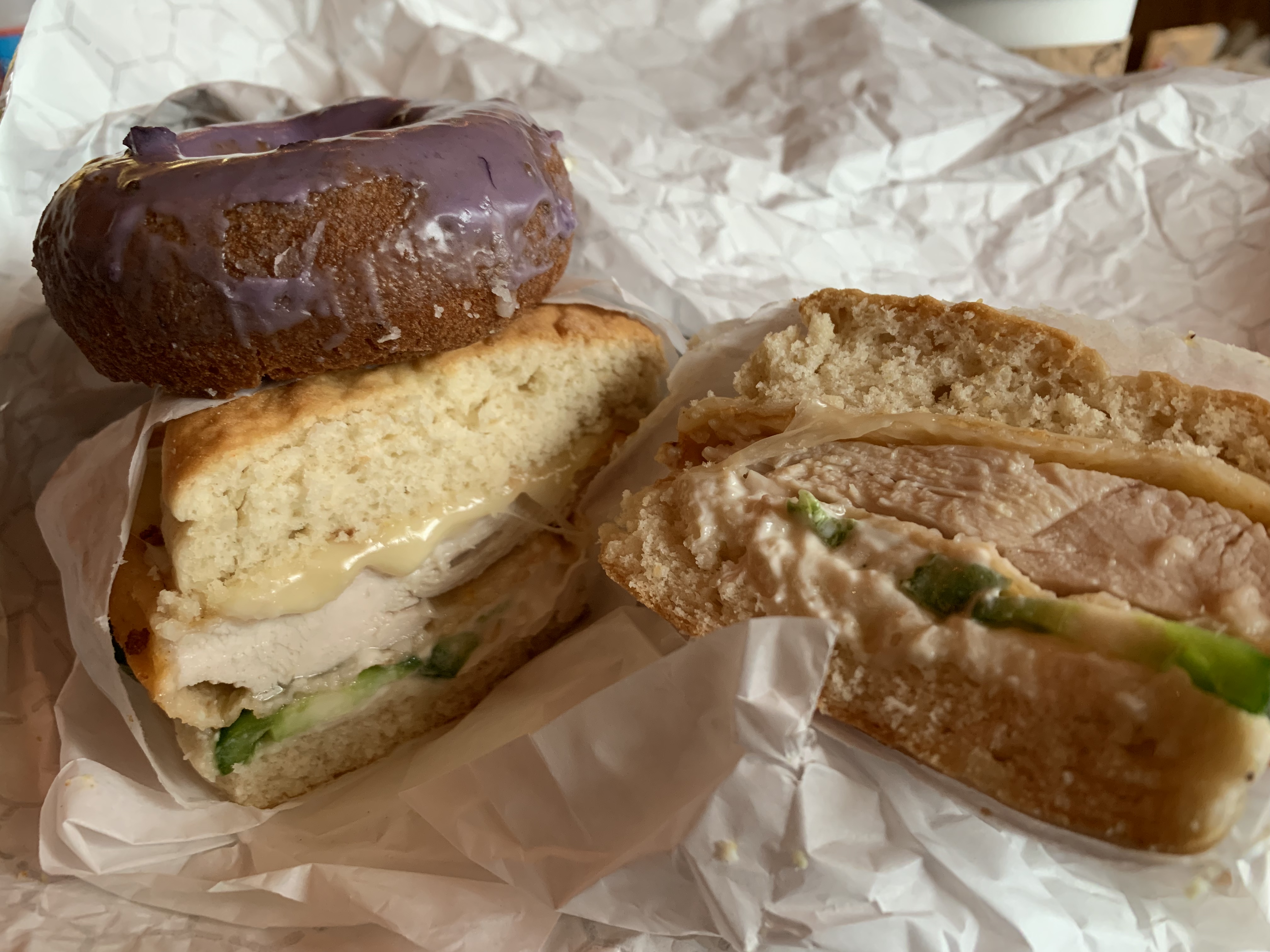 The biscuit was pleasant, but not mind-blowing. I liked the batter, but the chicken, a very sizable breast portion, could have been seasoned a little better. Obviously the point of comparison is the Chick Fil A chicken biscuit, which is the gold standard. If you’re not going to get in that ballpark, don’t bother coming to the game. I’d say with the jalapenos and satisfying doughy biscuit, this was somewhere in the ballpark. Perhaps I would have liked the Endooya even more.

After eating and celebrating our new find and swearing we’d be back again real soon, we set out on our Pokémon run, which included a rare opportunity to catch a Charizard as a special promotion for the Detective Pikachu movie. We both failed to catch it, as it ran away after the second or third attempted throw.

It was worth it, though, just for the story and the time spend out together. On the way home we discovered a house-shaped little free library set up on the side of the road, painted bright red with a Mickey Mouse theme. The kids had never seen one before, and I only rarely.

I think we all decided that day that the rain isn’t always such a bad thing.