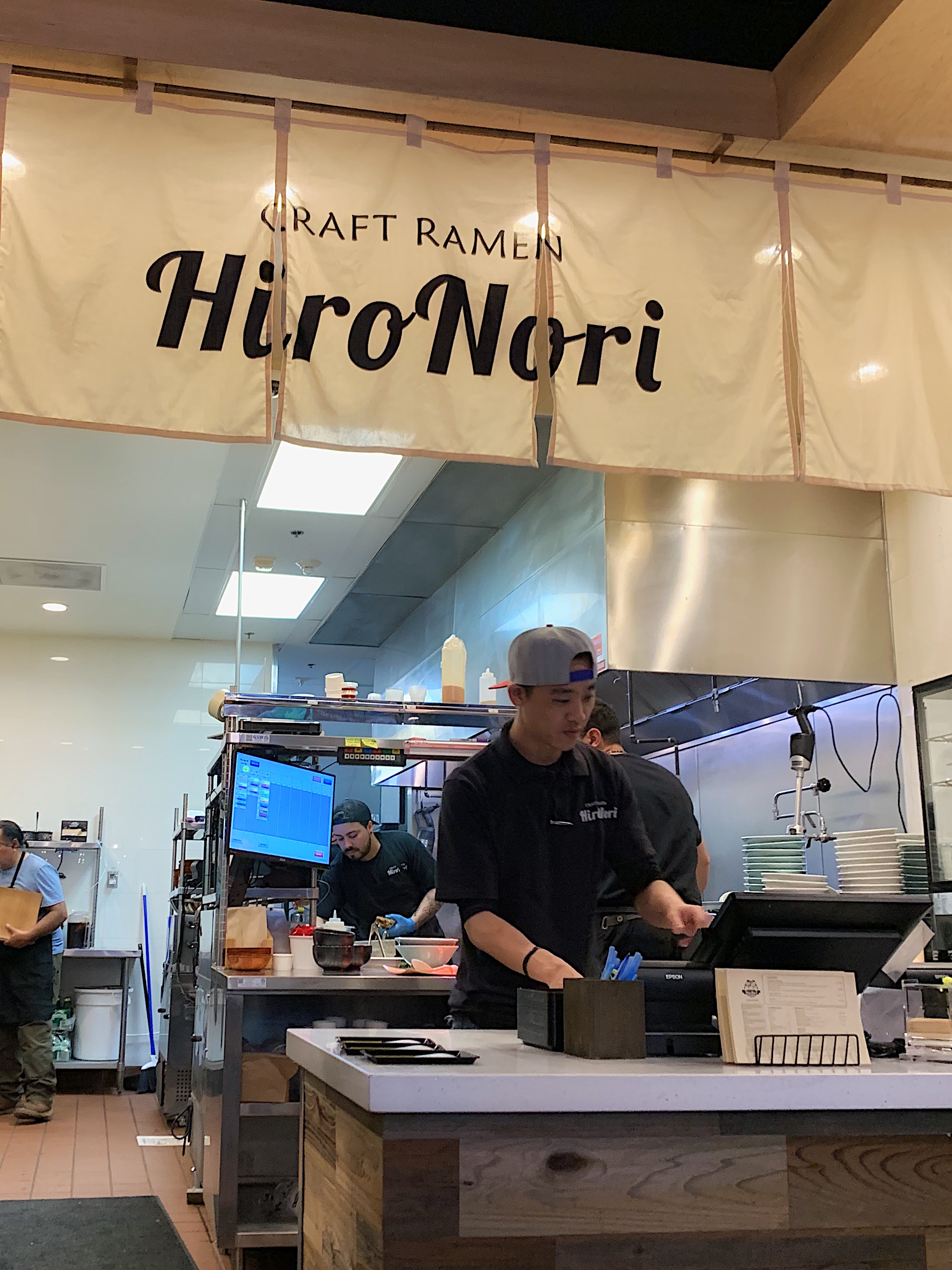 I have decided that when presented with a choice between the familiar and the new, I am going to lean in favor of new experiences.

It’s not a philosophy fixed in stone; just a kind of mental discipline I’m using to break myself out old patterns and force myself to continually discover new things. That way of thinking and acting served me well (literally?) in a culinary sense this past week, leading me to the door of three stellar restaurants serving very different cuisine.

First up was a Vegan cafe and brewery called Sage, located not far from the office. I’m trying generally to observe Orthodox Lent, otherwise I might never have given this place a second look, much to my loss. I might have been forever deprived of the experience of this wonderful and imaginative place with its ridiculously huge menu catering to vegans, vegetarians, and folks with food allergies. Oh, it also has a full bar. 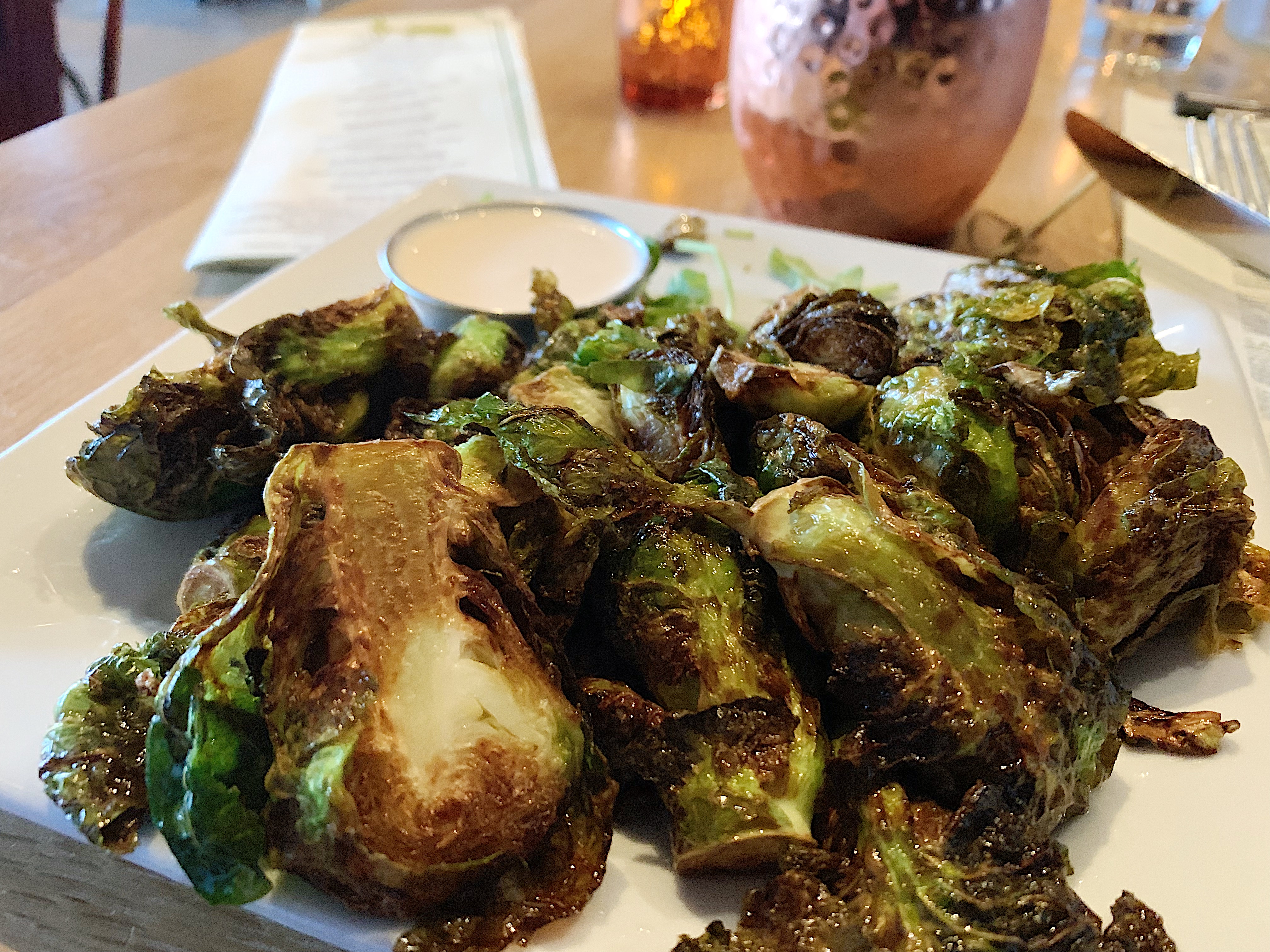 I got a grilled brussels sprouts appetizer, and I’m not even that big on brussels sprouts. Call it a whim, or maybe an inuition. I couldn’t believe how good these were. The nice char on those greens had my mouth watering. It was served with a spicy citrusy dressing of some kind, and there was enough on the plate to make it a meal in itself. 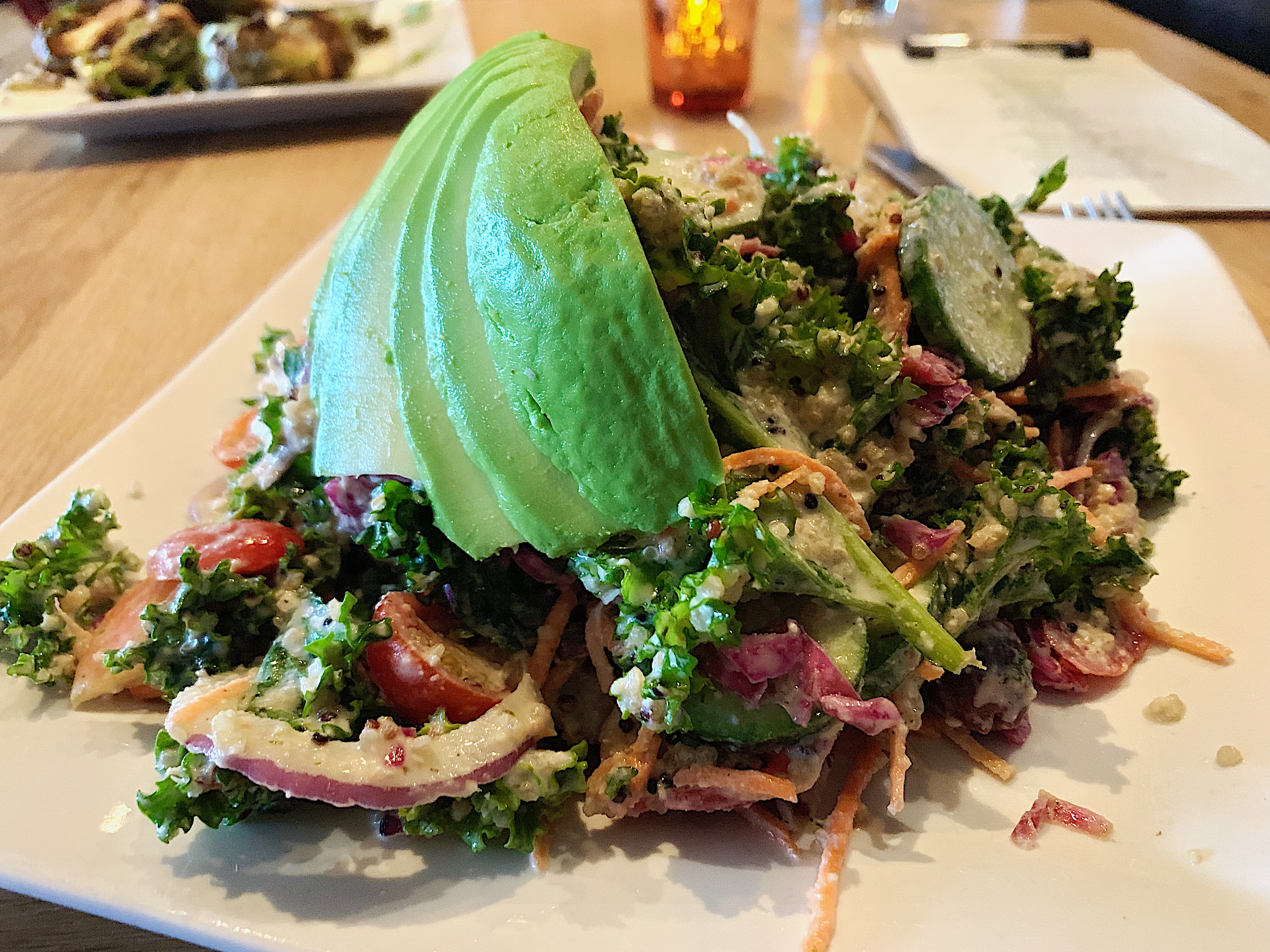 I opted for the $2 dinner salad, and got basically another meal-sized portion of greens. This was the “Goatless Greek” salad, which I imagined to be like a standard greek salad, though served sadly and appallingly without the feta. Again — it’s Lent, so I was going to suck it up. To my surprise, what I got was something out of this world. The creamy dressing, the sesame seeds, the avocado all combined to make something that to my palette was nothing like a Greek salad, but something a whole lot like awesome. 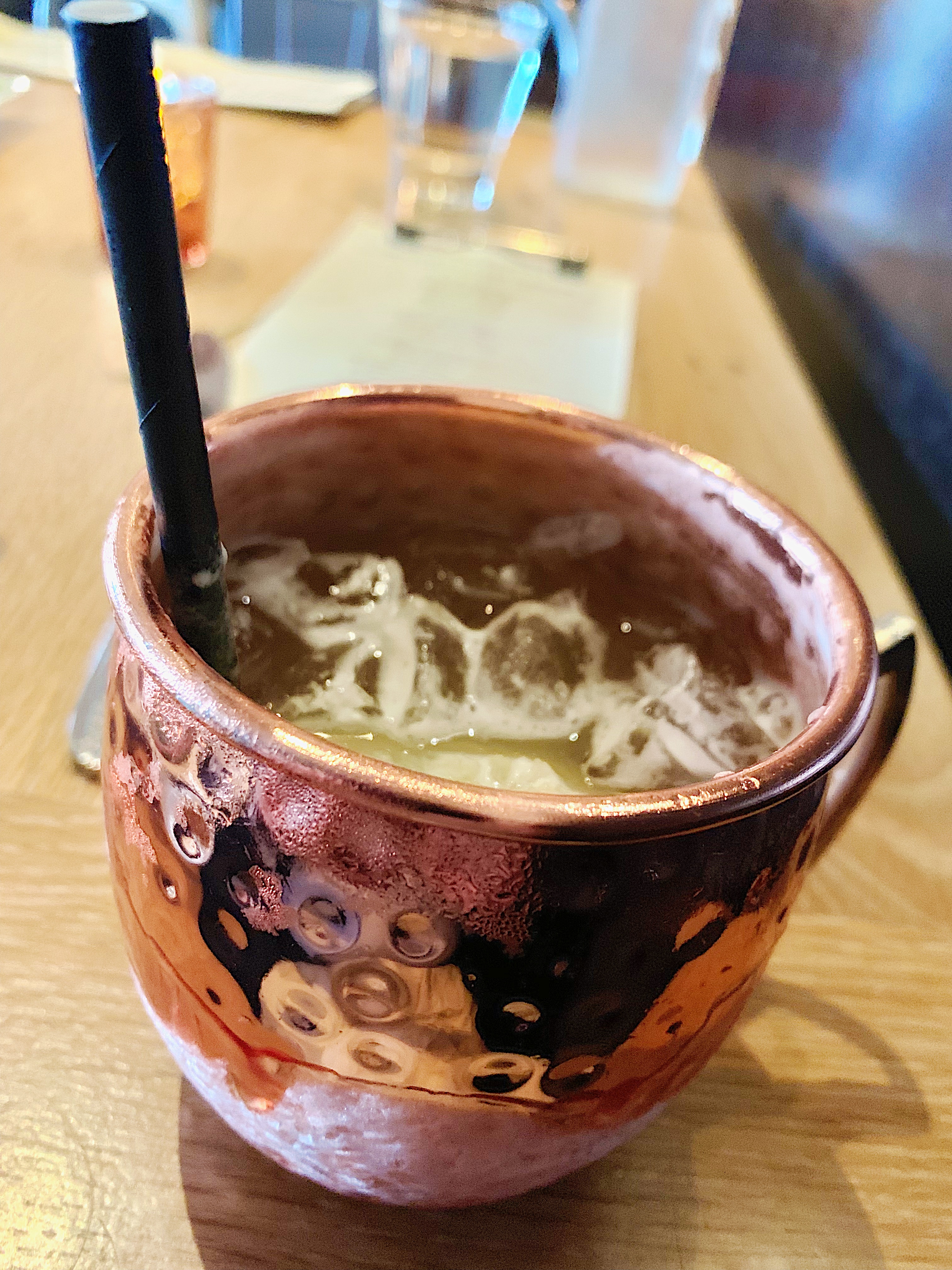 I have to mention the drink. Yeah, that one was a bit of a Lenten flub. It was a Kombucha Mule. Damn good. Very zesty and refreshing, and the one thing they brought out that I wished was twice the size. But they had use the traditonal mule cup, so I forgive them. I noticed they had an extensive and very interesting looking cocktail menu. Definitely worth checking out on a later trip. 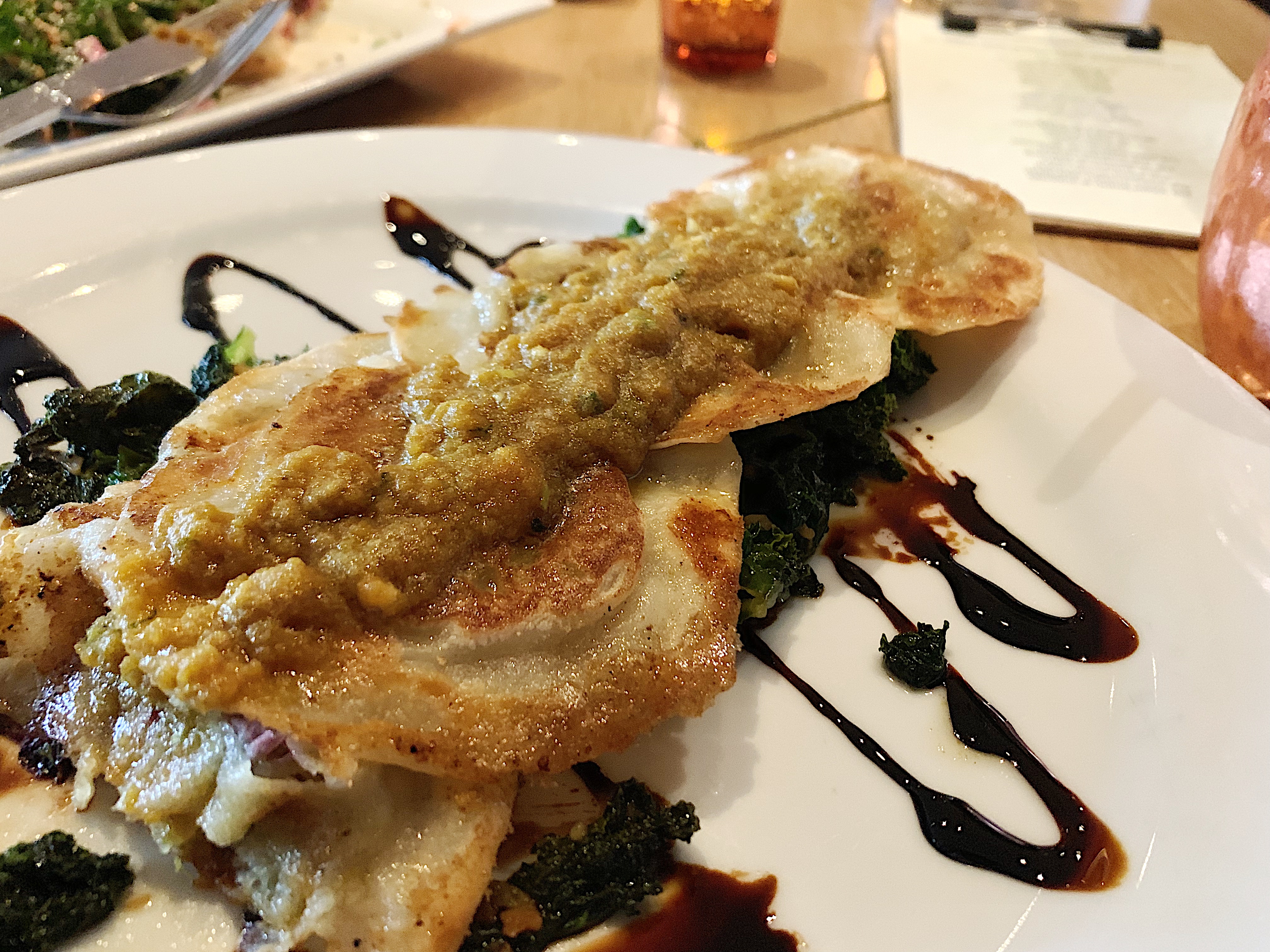 The main course was, if memory serves, a potato and broccoli piroshki. I believe they used broccolini for this, mostly the leafy green bits. There were two different sauces, a kind of garlicy mash over the potato piroshkis, and a deep acidic one that brought out some bitterness in the greens. All in all, it was heaven. Each dish they brought out was better than the one before, and every one felt strong in its own right.

I have to say this is the first time in my life I’ve ever tried eaten (basically) vegan for any extended length of time. And although I wouldn’t want to turn it into a lifestyle I felt that if I had access to places like this back home I might be able to make a go of it. In fact, I might not even miss it.

Sage for the win. Rating: Transcedent

Next I tried the well-reviewed Gale’s Italian Restaurant, nestled in what looked to be Pasadena’s antique district, as I passed a handful of such places along the way. I had the distinct impression as I walked past Pasadena’s Central Park, admiring the anachronistic architecture of the old Castle Green and chuckling to myself at the genteel advertisement for croquet lessons along the fence of a yard shared with the resident Cricket league, of coming out of the more commercial and touristy byways of “Old Town” and into the city proper.

Walking in the door, Gale’s impressed me as a traditional, upscale Italian family restaurant, the kind where you might expect to hear Sinatra playing while you eat marinara pasta and sip a hearty red wine. And in fact I think I did catch Sinatra over the speakers once. The music is pleasantly subdued. 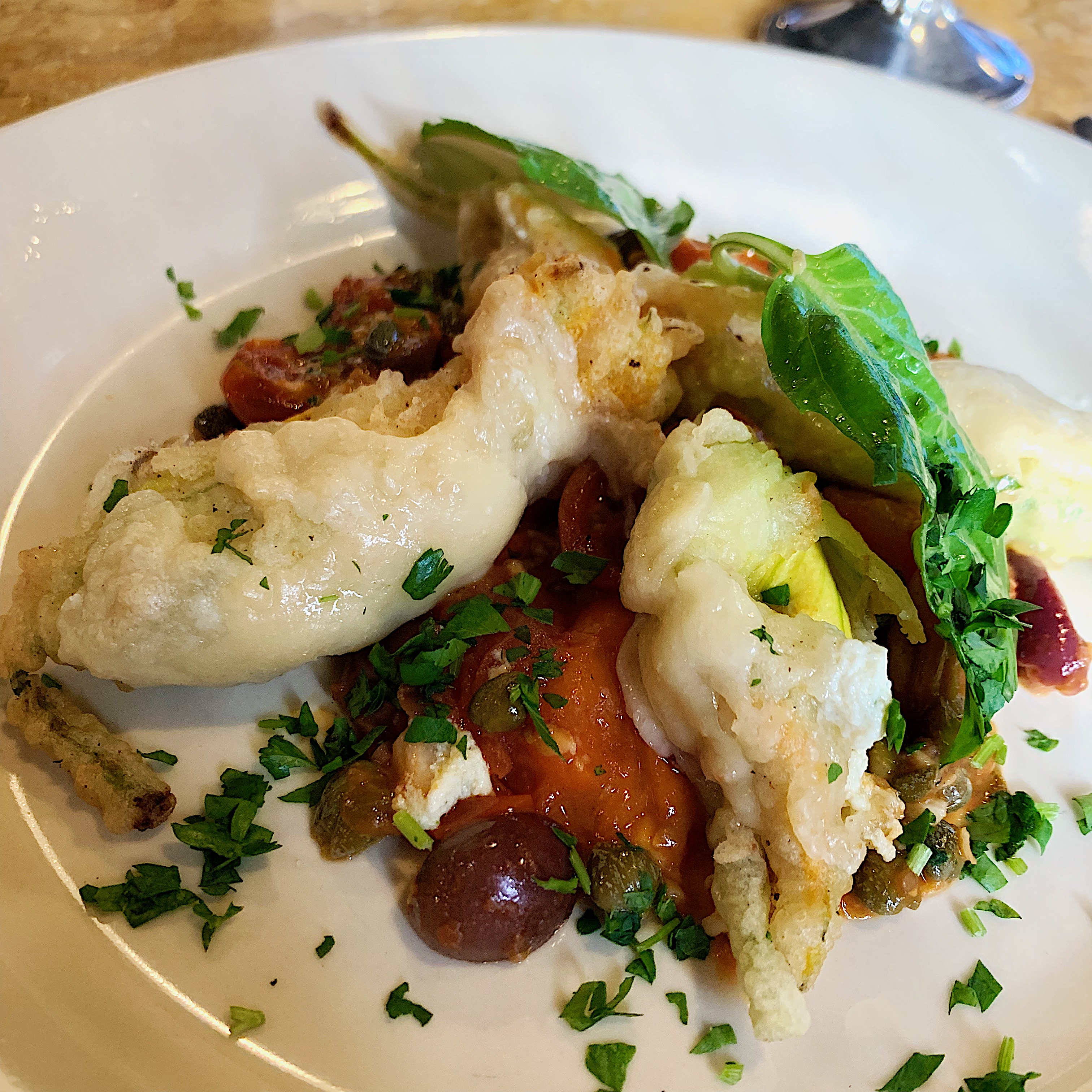 The appetizer I ordered was delicious. Fried cucumber flowers stuffed with mozzarella and ricotta cheese, in a tomato ragu. Really beautiful presentation. Loaded with flavor. So much so, in fact that I think it detracted from qualities of the more delicate main dish. That was my bad on the pairing. But I found myself wanting to come back to this again as I turned to my pasta. The fried flowers were soft, not crispy, and with the melted soft cheeses, which balanced more heavily toward the ricotta side, had something of the character of a dumpling. The tomato ragu had such a nice rich flavor. The tanginess of the olives mixed in gave me the sensation of sun-dried tomatoes, though I don’t believe those were actually in the dish. 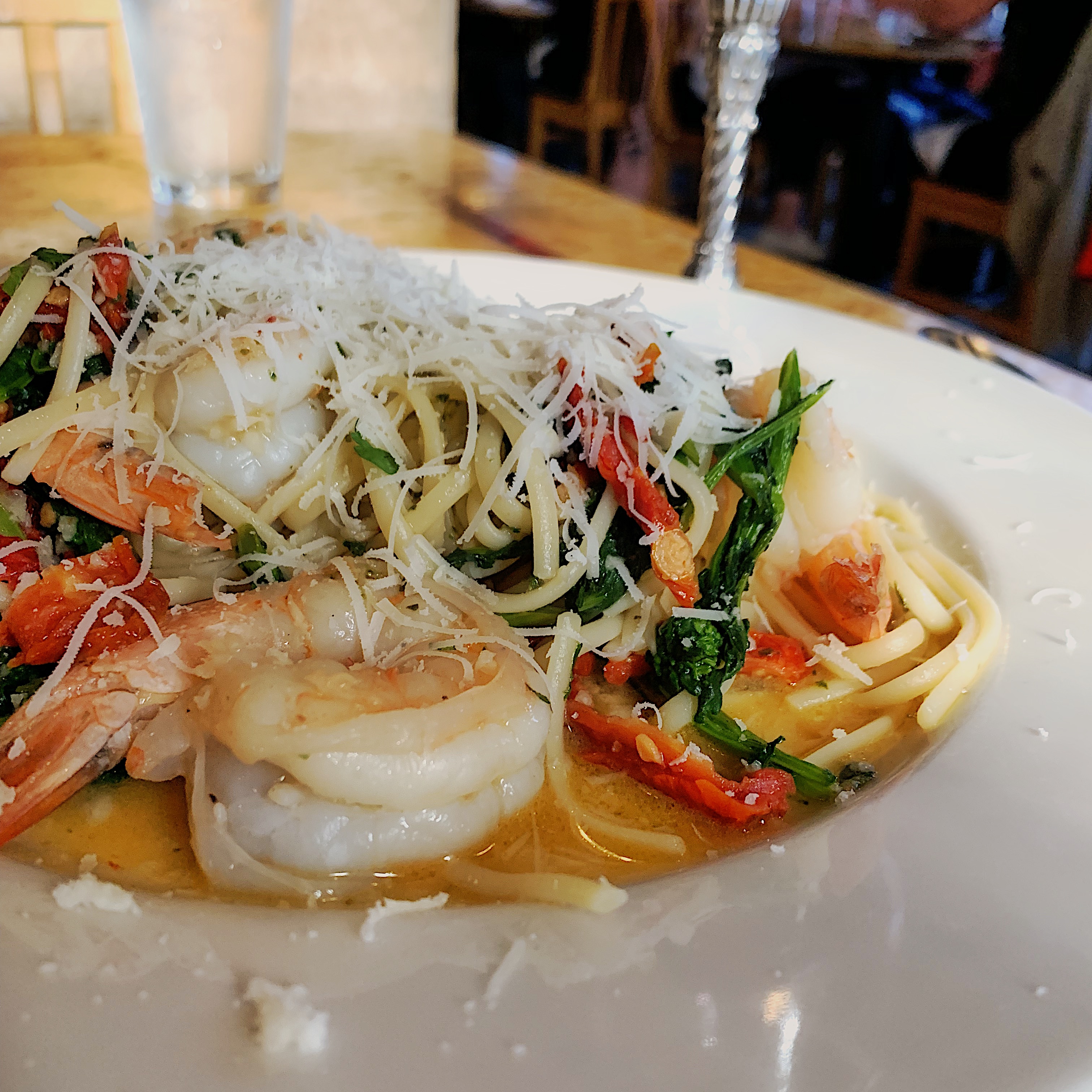 My main dish was a shrimp linguini pasta with really hearty and well cooked shrimp, in a light white wine and butter sauce. This must be the season for broccolini in Pasadena because it kept popping up in almost everything I had there. Lucky for me it’s my favorite green vegetable, so I was loving it. The pasta had some welcome touches of it. The overall flavor was subdued and delicate, as you would expect from this kind of dish, but I think the more flavorful appetizer and strong red I was drinking had me thinking the dish needed a little… something extra. I probably just should have asked for a little red pepper flakes and everything would have been in order. 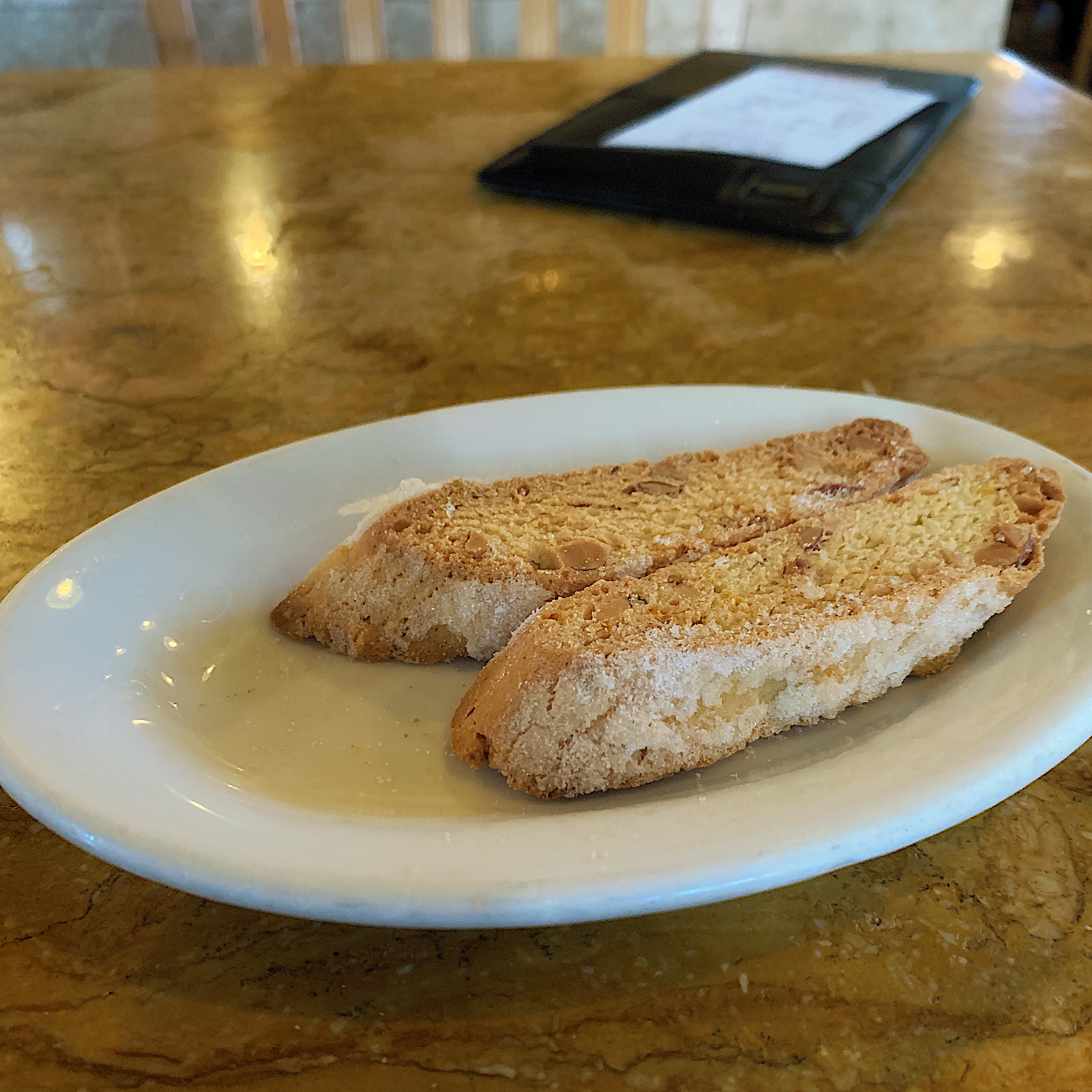 After I’d eaten, the waiter, who was very attentive and helpful, brought out some complimentary biscotti, a tradition I’d not seen before. I’d like to think it was because he guessed from the fact that I was a guy in his 40s dining alone, snapping pictures of my food, that he presumed I was a critic for a local paper, and not just some douchebag Instagramming his dinner. In any case, it was a lot more welcome than breadsticks at the start of a meal, and that almondy flavor was so nice I asked for a cup of black coffee to go with.

Stop in for some old school dining charm. Rating: Superior

For my birthday I decided to treat myself to some of the ramen that Pasadena seems to do so well. This time I tried a new place.

Hiro Nori was still in the process of opening last time I was in California, but I made note of it after reading their explanation of “craft ramen” on the door. I wanted a place that might offer a good veggie ramen option, and I figured this would be it. This seemed like more of a contemporary ramen shop, catering to modern and Californian tastes. 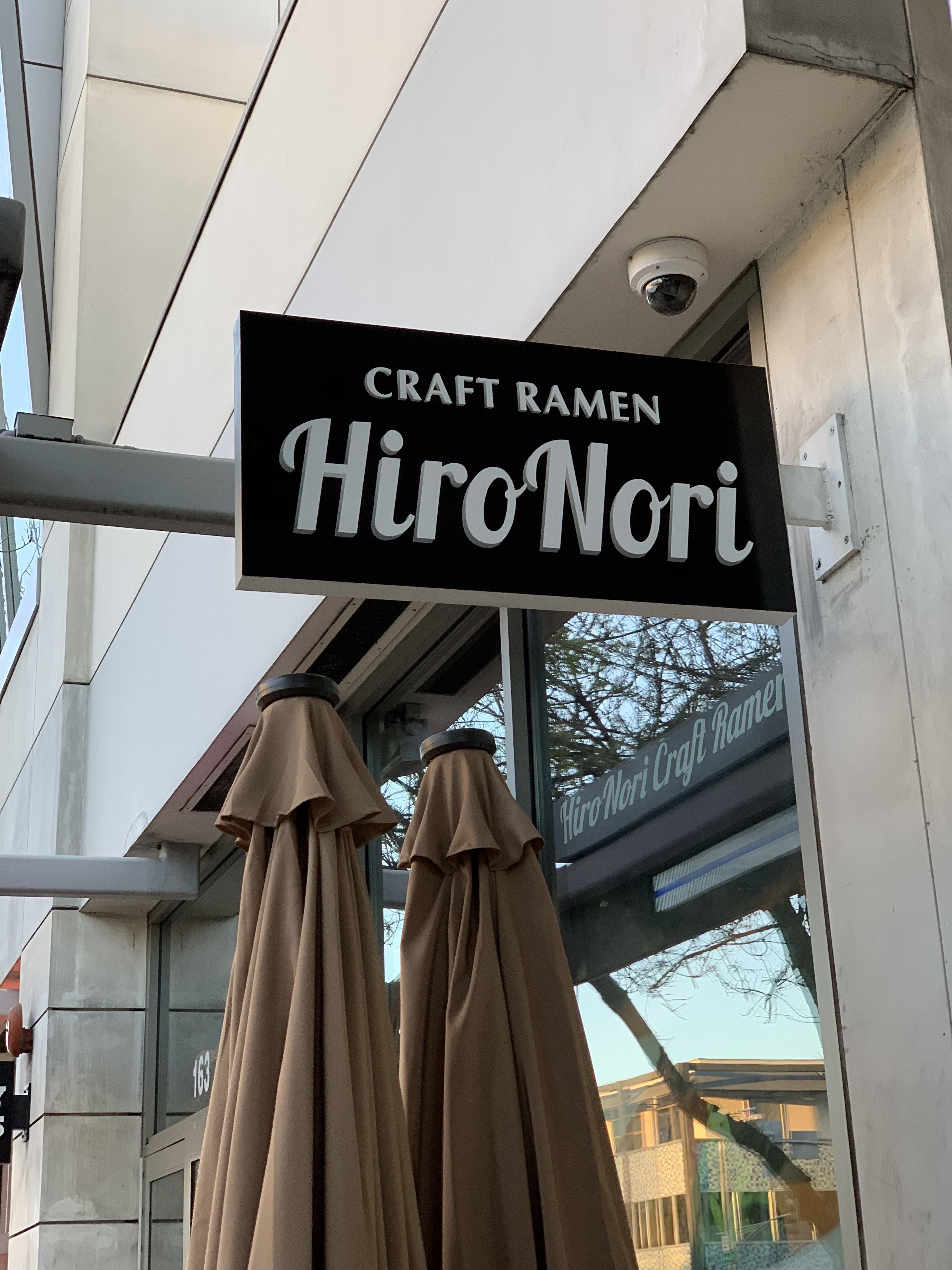 The menu was small, but had everything I came for and more. There was a vegan ramen option, so I got that, along with this wonderfully tasty crab and cucumber salad appetizer. The cucumber was drenched in rice wine vinegar for a nice tangy flavor. The crab was a lot more forward than I would have expected, and added some welcome saltiness to the dish. I was impressed. 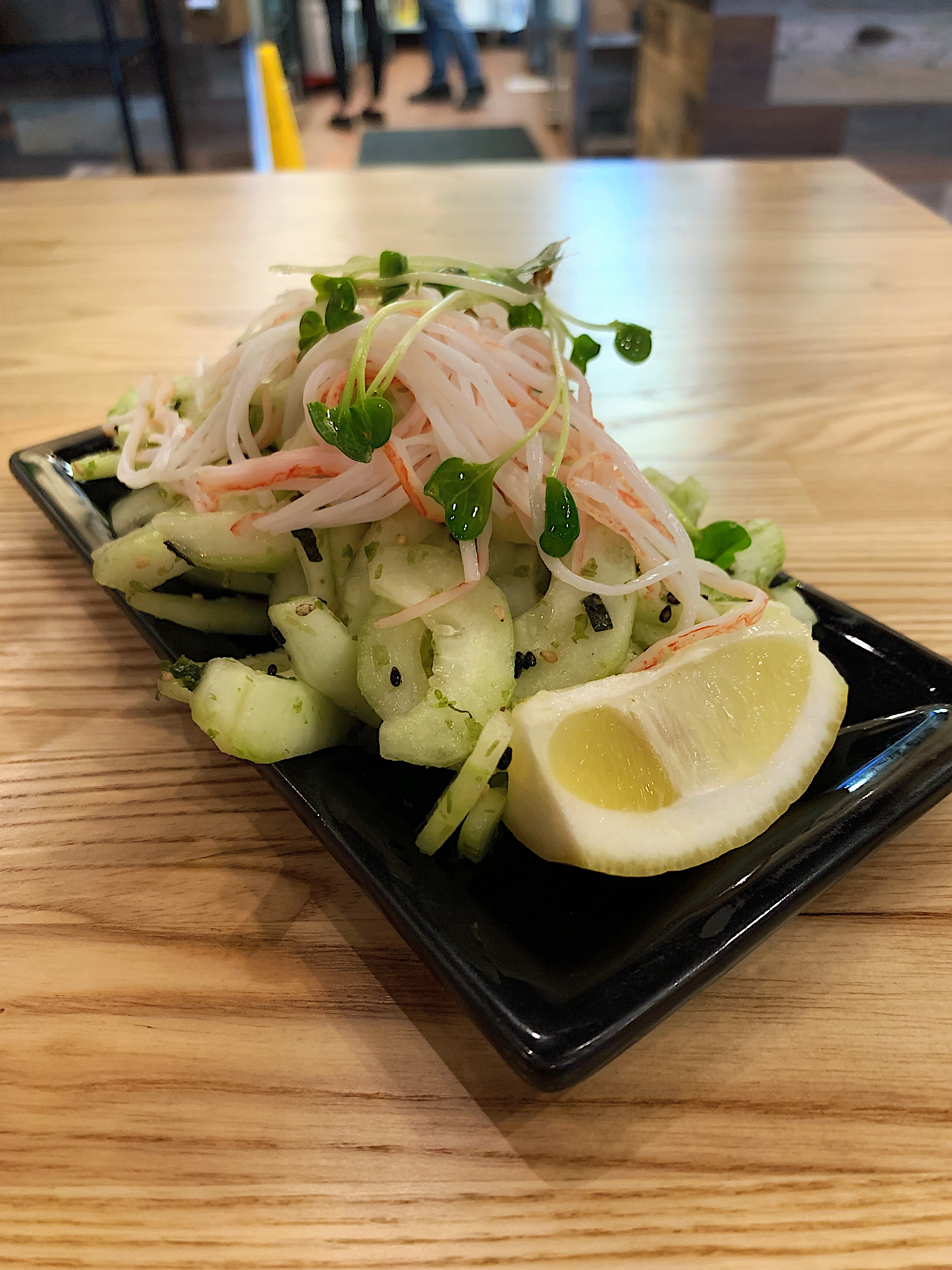 The ramen, though. What a fantastic presentation. Two huge broccolini spears covered about a quarter of the large bowl, with a mound of bean sprouts (I love them) sprinkled with some soy crumble in the center. Some plainly visible yellow corn kernels accented the surprisingly creamy and oily looking broth.

I had to go for that broth right off. For me, that’s the star of the show, and I was afraid the vegan broth would be a little on the weak side compared to traditional tonkatsu bone broth. And although it may not have sit quite as heavy on the stomach, the vegan broth they brought out was phenomenal. 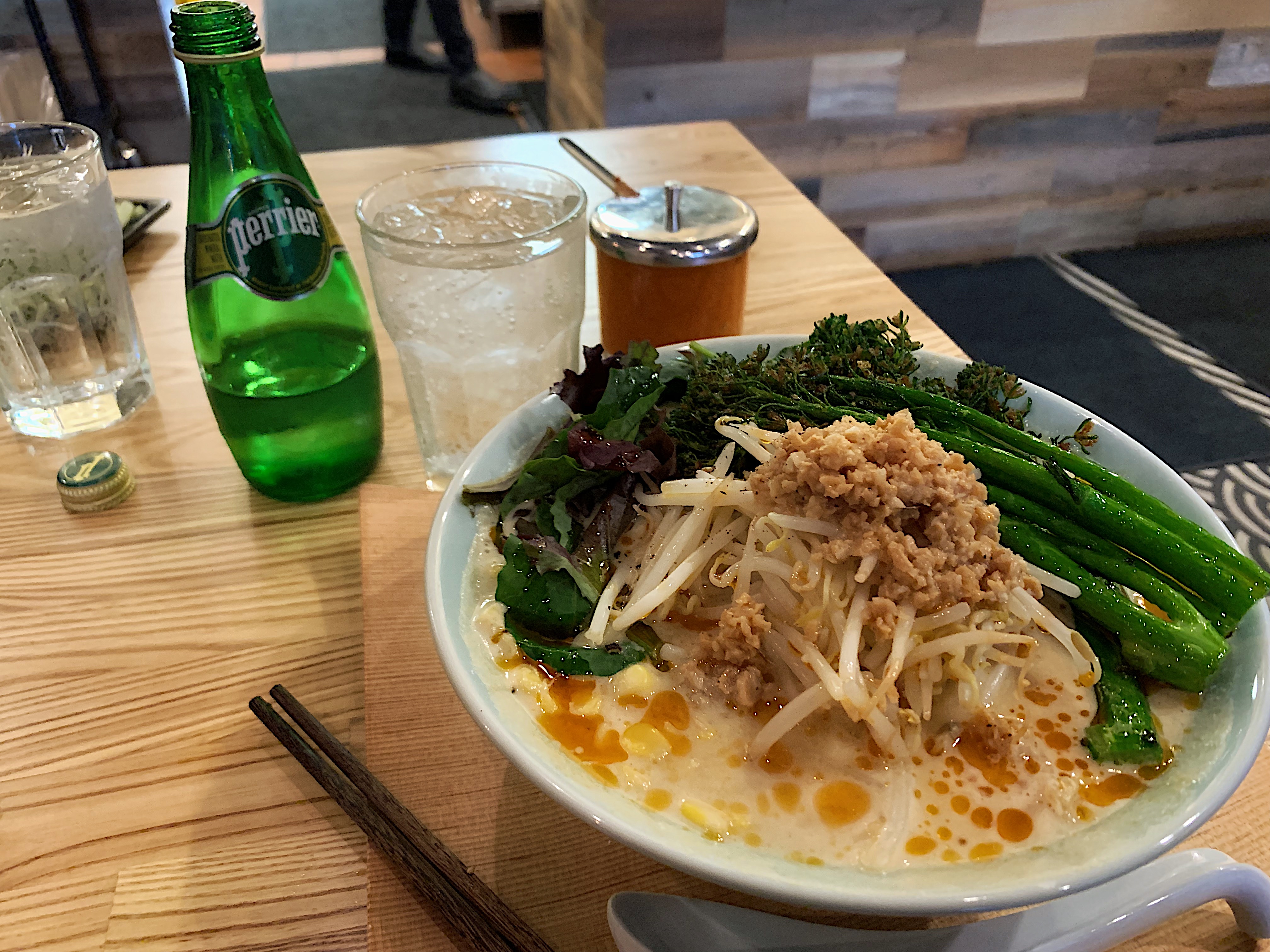 I really don’t know how they got such a creamy and rich vegetable broth. I’m guessing some coconut milk, maybe? It was outstanding.

The noodles, too, were fantastic. One of the things I like about eating ramen and Japanese food in general is that can eat unselfconsciously in the manner in which I tend to eat naturally; that is to say, with my face in the bowl, scooping up larger portions that can fit in my mouth, and slurping everything up — which, as I understand, is exactly the way you’re supposed to do it. 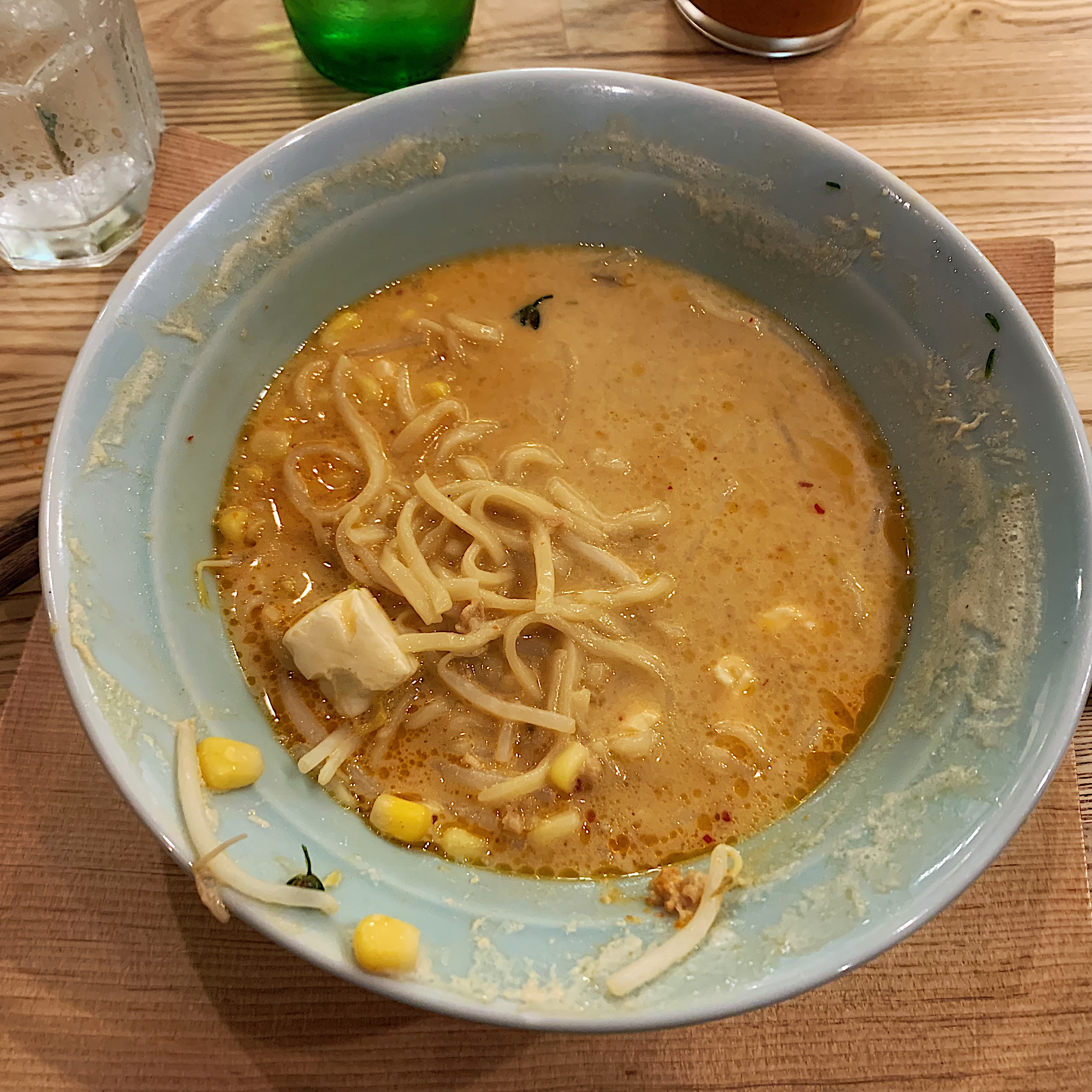 It was obvious the manager, pictured up top, who also seated me, took a lot of pride in the business, and was very keen to see that I enjoyed the experience. All that for a price so meager I felt like I was robbing them. God bless the good folks at Hiro Nori who have not forgotten the true spirit of ramen as a quick, cheap, fast, and hearty food for the working man. Rating: Bonsai 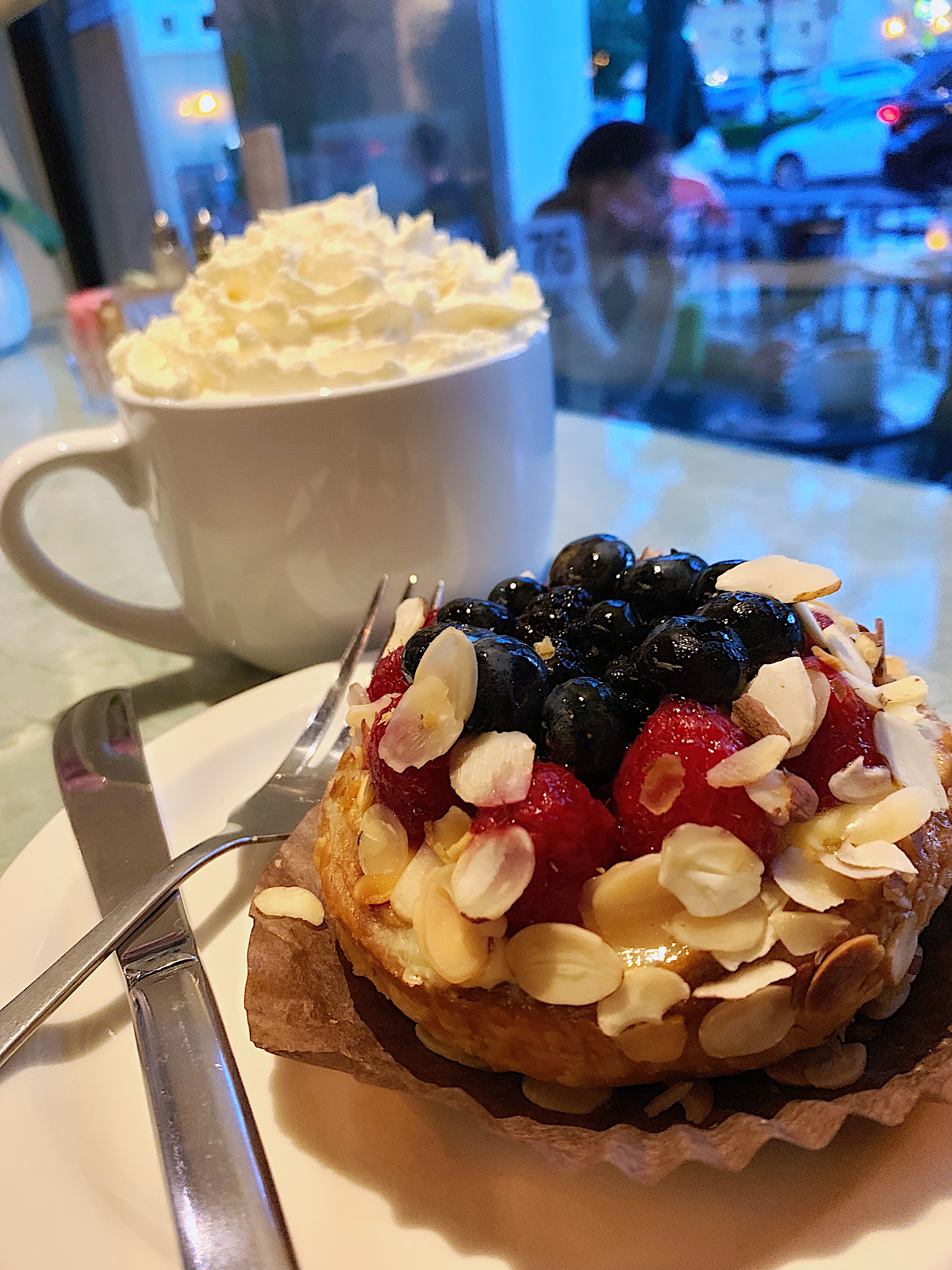 After dinner I dropped by Urth Cafe for a special birthday treat, a Bavarian creme tart and hot cocoa. Although I was alone, I didn’t feel it so much. I knew my wife and kids and loved ones were there with me in spirit. It was a truly happy day and I felt blessed to be able to enjoy it in that way.

I hope you enjoyed reading about it.